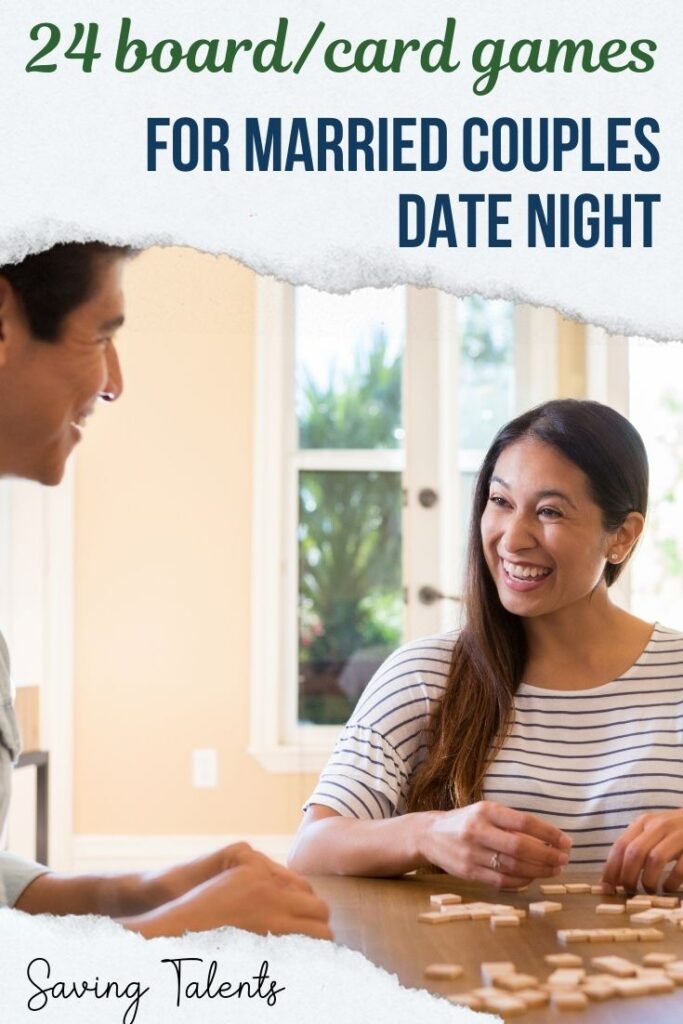 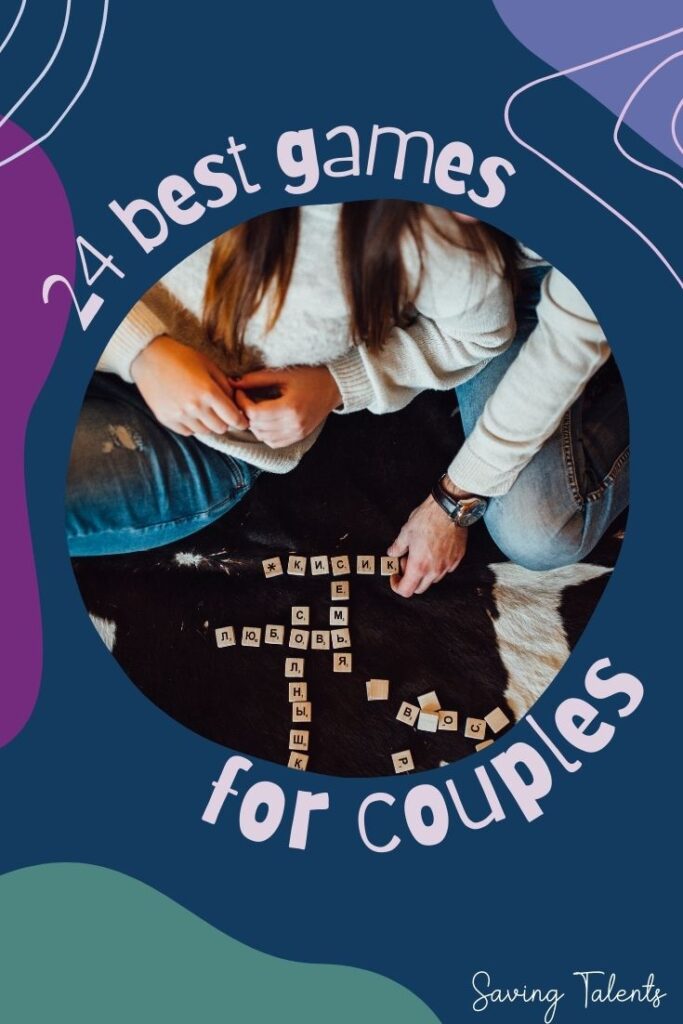 Hey y’all, Tiffany here with some of the best board and card games for married couples (or two people).

Because of my Crohn’s disease, we spend a lot of time at home. That’s part of the reason we made a big list of unique and frugal date night ideass that can be done from home.

One of our favorite things to do for date night is to play board and card games! We really enjoy them because it allows us to laugh together.

Neither Phillip nor I are very competitive when it comes to board and card games (even though I was as a child), so it’s a great way to unwind after a long week.

These games aren’t specifically just for married couples – they work great for two people! We just play them a lot because they work perfectly for our situation.

We have a huge collection of games, and I thought I’d share my favorite ones with you!

Best Board and Card Games for Married Couples

You can head over to Amazon to check out all the games HERE, or you can browse the list below.

Inspired by the medieval fortress in southern France of the same name, Carcassonne is a tile-laying game in which players fill in the countryside around the fortified city. We love games like this one when we have date night!

With more than 55 million units sold, Rummikub is one of the world’s best-selling and most-played games! Players take turns placing numbered tiles in runs or groups, Rummy style – the first player to use all of their tiles wins. I love playing Rummikub with my kids, too.

Players take turns placing their 21 pieces on the board, and each piece must touch another of the same color, but only at the corners. Phillip wins this game more frequently than me because of his engineering skills.

Scrabble, the classic crossword game, is full-on fun for friends and family. You can feel the excitement begin as soon as you rack up your letters, choose a great word, and hope to land on a triple-word score. It’s better than Words With Friends, and it’s a great game for couples!

Earn points by spotting words your friends don’t before time runs out. Shake the grid to mix up the letter cubes. Then lift the lid and flip the timer. Players have 90 seconds to write down as many words as they can find on the grid before time is up. At the end of the round, score the words. If two or more players find the same word, that word doesn’t count.  There are some rounds where Phillip and I found all the same words on date night!

These spooky sassy skeletons are looking for a couch to crash on. Compete to knock your opponent’s skeletons off the couch in this quick and easy two player game. Once you’ve filled the couch with your own skeletons you can declare yourself victorious. This game for two (or more) people is super simple, which is great for a night when you’re dead-tired from the day (pun intended!).

A Kitty-Powered Russian Roulette Card Game – The hit party game for family and friends who are into kittens and explosions and laser beams and sometimes goats. The cards in this game make us laugh, which is perfect for date night..

Wonders Duel takes the game play and excitement of the original and adapts it for one-on-one battles. Take control of your civilization and decide to invest in science, military or prestige. Two New ways to win will keep you on your toes and watching every move your opponent makes. If you fail to build defenses your capital city may be destroyed, but ignore technology and your people may be left in the dark ages. It’s a constant tug of war. 7 Wonders is a fantastic game, but one that you can’t play with just two people very well. This version lets us have the fun with just us as a couple!

This game may look like a kid’s game, but Phillip and I really enjoy it! In Labyrinth, Ravensburger’s wildly popular board game for kids and adults, players find the shortest route through the l abyrinth to win. In the game, players aim to reach all their treasures and targets as they move along the board, shifting the maze as they go along. It’s a fun date night game!

This is one of our FAVORITE date night games – we pull it out about once a week to play! It helps that we were missionaries in Puerto Rico, so it has a special place in our hearts. Transform Puerto Rico into an economic and industrial powerhouse in San Juan, the card game based on the award-winning Puerto Rico board game. Race against your fellow colonists as you strive to buy up plantations and mines, and build industrial, commercial and government buildings. Become the dominant power in this game that’s perfect for couples. Transform the economy of this tropical paradise and show the world who is in charge of the island!

An oldie but a goodie! Just like Rummikub, Phase 10 is the Rummy-type game with a twist! Be the first player to complete 10 varied phases with two sets of three, one run of seven, or seven cards with the same color. It’s a great game for just two players.

Phillip’s favorite game is Settlers for Catan, which I kind of hate. But this two-player version is another favorite for us that we pull out on a regular basis! Like the original CATAN board game, you’ll roll dice, collect resources and spend those resources to grow your civilization.

This is a shorter, more portable version of the bestselling cooperative board game Pandemic. Work together to discover cures for 3 diseases and win the game as a team! Cooperative games are always enjoyable for date night!

This game doesn’t work quite as well for just two players, fo Phillip and I will often be two people each so we can have more success. That makes it perfect for a game that couples play together!

Based-on the original party game hit, Codenames Duet is a standalone co-op clue giving adventure that sends you and your partner on a top secret mission to a crowded city. Your objective? Contact 15 agents while avoiding a band of enemy assassins. Phillip and I learn a lot about how the other communicates when we play this game meant for two people!

Killer Bunnies and the Quest for the Magic Carrot is a fast paced, action filled card game, in which you must try to keep as many Bunnies alive as possible, while eliminating your opponents’ Bunnies. The problem: Your opponents are armed with weapons and will stop at nothing to keep you from winning the game, which can get dreadfully vengeful, horribly nasty, hilariously messy, and just plain fun. We had some friends introduce this game to us in college during our first year of marriage, and it was fantastic!

Ever imagined you were a bean farmer? Sure, who hasn’t! You’ve got your red beans, your green beans, your black-eyed beans, your coffee beans. But where to plant them? This is a fantastic game that my entire extended family loves to play together at family reunions, but Phillip and I enjoy it just as much for date night.

Two armies clash. Who will be victorious? Two players command Napoleonic armies and devise plans to deploy troops, using strategic attacks and clever deception to break through the opponent’s line and capture the flag! This game is specifically designed for just two people, and it’s like a combination of Minesweeper and chess.

Mille Bornes is a classic card game of cross-country racing, challenging you to outrace your opponents as you dodge the hazards they put in your way. Phillip grew up playing this game, and we enjoy playing it together as a couple.

Perpetual Commotion is a fast and furious card game where players scramble to play the same colored cards in number order into the center arena. The more cards you play, the more points you score. There are no turns and all players are playing on the same stacks of cards. This can end in a battle for us, trying to get the cards down first!

In Kingdom Builder the players create their own Kingdoms by skillfully building their settlements and aiming to earn the most gold at the end of the game. This game was a gift, and we have loved it ever since!

Take turns rolling dice to try to score combos. You get a total of 13 turns and may roll up to three times on a turn. At the end of each turn, you must fill in one empty box in your column on the score card. I find this game very relaxing, but Phillip finds it stressful!

Who would have guessed there’d be so many exciting twists and turns in such a small game? We love how all players are involved with every roll of the dice! It’s great for groups or just two players.

Join a team of fearless adventurers on a do-or-die mission to capture four sacred treasures from the ruins of this perilous paradise. Your team will have to work together and make some pulse-pounding maneuvers, as the island will sink beneath every step! Race to collect the treasures and make a triumphant escape before you are swallowed into the watery abyss! Phillip and I love playing cooperative games, and this one is no exception!

Four diseases threaten the world, and your elite team of specialists must find a cure for each of them before it’s too late. Travel around the world, treat local populations, and collect sets of City cards to complete research. Make sure to contain the spread—if there are too many outbreaks, you’ll lose the game. Ths has been a perfect at-home date game for couples during COVID!

The world’s best architects are looking to demonstrate their skill. Employ the best teams of builders and make sure they always have the right currency they need. The player who builds the most valuable Alhambra will win the competition for the best palace. This is another favorite that Phillip and I pull out at least once a month, if not more.