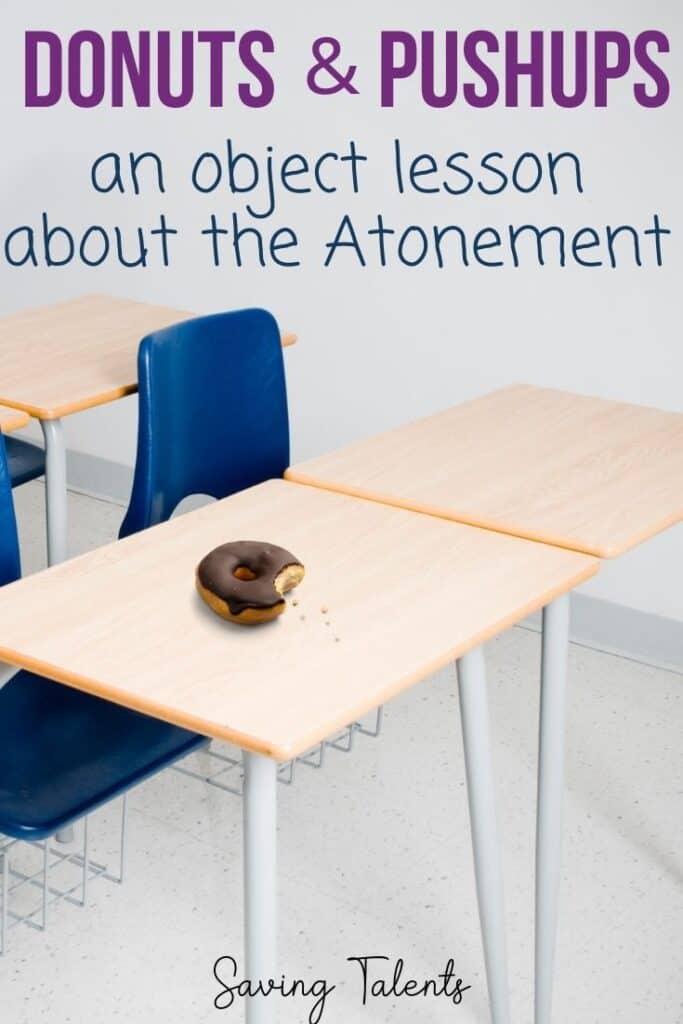 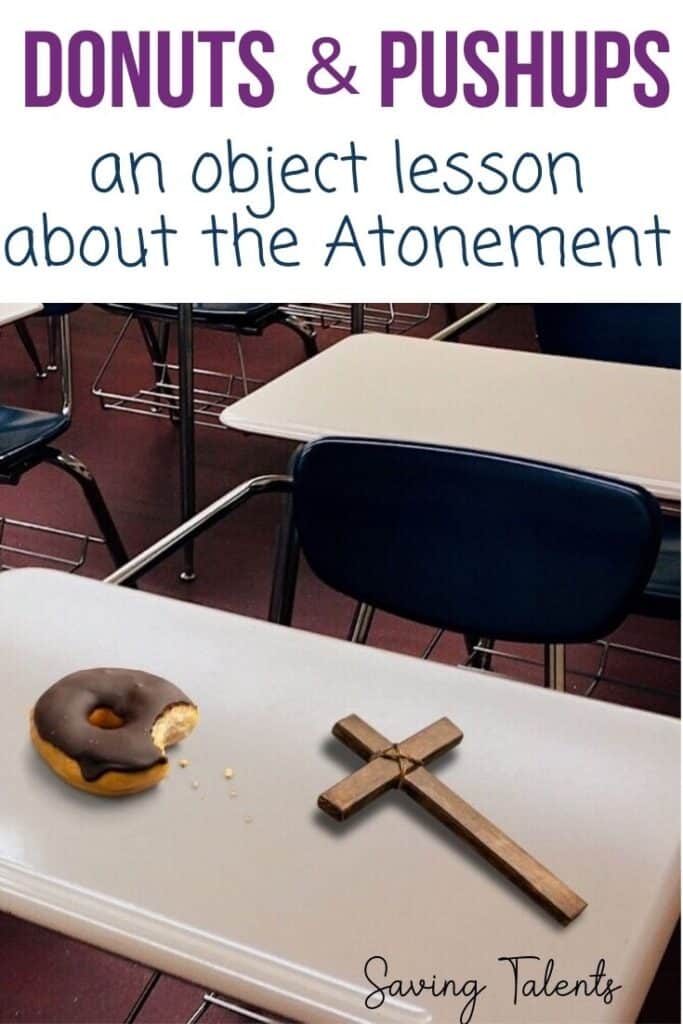 Hey y’all, Tiffany here with a powerful object lesson of the Atonement of Jesus Christ involving donuts and push-ups.

I first heard this story as a pre-teen, before the internet was in most households. Then several years later, I received it as an email forward from a family member.

I tried finding the original book or cassette where I first read/heard it, but I wasn’t able to do so. I thought it was from the book Doughnuts, Letters, and Midnight Phone Calls, but it wasn’t there.

If any of you know the origin of this story about donuts, pushups, and the Atonement of Jesus Christ, please let me know! I would love to find the original.

Since I don’t have the actual source, I putting in what I have in the email I received, with a few additions from what I remember from the original story.

We also did our own version of this object lesson as a family for a Come Follow Me Family Home Evening with our oldest (age 7 at the time) trying to do the pushups for each family member. It was a memorable experience.

You may also enjoy this post on a Christ-centered Easter Egg Hunt.

Brother Christianson taught Seminary. He had an open-door policy and would take in any student that had been thrown out of another class as long as they would abide by his rules. Steve had been kicked out of his sixth period and no other teacher wanted him, so he went into Brother Christianson’s Seminary class.

Steve was told that he could not be late, so he arrived just seconds before the bell rang and he would sit in the very back of the room. He would also be the first to leave after the class was over.

One day, Brother Christianson asked Steve to stay after class so he could talk with him. After class, Bro. Christianson pulled Steve aside and said, “You think you’re pretty tough, don’t you?”

Then Brother Christianson asked, “How many push-ups can you do?”

“Do you think you could?” Again asked Brother Christianson.

Brother Christianson said, “Good! I need you to do this on Friday.”

Friday came and Steve got to class early and sat in the front of the room.

When class started, Brother Christianson pulled out a big box of donuts. Now these weren’t the normal kinds of donuts, they were the extra fancy BIG kind, with cream centers and frosting swirls. Everyone was pretty excited-it was Friday, the last class of the day, and they were going to get an early start on the weekend.

Bro. Christianson went to the first girl in the first row and asked, “Cynthia, do you want a donut?”

Bro. Christianson then turned to Steve and asked, “Steve, would you do ten push-ups so that Cynthia can have a donut?”

Steve said, “Sure,” and jumped down from his desk to do a quick ten. Then Steve again sat in his desk.

Bro. Christianson then went to Joe, the next person, and asked, “Joe do you want a donut?”

Joe said, “Yes.” Bro. Christianson asked, “Steve would you do ten push-ups so Joe can have a donut?” Steve did ten push-ups, Joe got a donut.

And so it went, down the first aisle, Steve did ten pushups for every person before they got their donut.

And down the second aisle, till Bro. Christianson came to Scott.

Scott was captain of the football team and center of the basketball team. He was very popular and never lacking for female companionship. When Bro. Christianson asked, “Scott, do you want a donut?”

Scott’s reply was, “Well, can I do my own pushups?”

Bro. Christianson said, “No, Steve has to do them.”

Then Scott said, “Well, I don’t want one then.”

Bro. Christianson then turned to Steve and asked, “Steve, would you do ten pushups so Scott can have a donut he doesn’t want?”

Steve started to do ten pushups. Scott said, “HEY! I said I didn’t want one!”

Bro. Christianson said, “Look, this is my classroom, my class, my desks, and my donuts. Just leave it on the desk if you don’t want it.”

And he put a donut on Scott’s desk, left untouched.

Now by this time, Steve had begun to slow down a little. He just stayed on the floor between sets because it took too much effort to be getting up and down. You could start to see a little perspiration coming out around his brow. Bro. Christianson started down the third row. Now the students were beginning to get a little angry.

Bro. Christianson asked Jenny, “Jenny, do you want a donut?”

Then Bro. Christianson asked Steve, “Steve, would you do ten pushups so Jenny can have a donut that she doesn’t want?” Steve did ten, Jenny got a donut.

By now, the students were beginning to say “No” and there were all these uneaten donuts on the desks. Steve was also having to really put forth a lot of effort to get these pushups done for each donut. There began to be a small pool of sweat on the floor beneath his face, his arms and brow were beginning to get red because of the physical effort involved.

During his class, however, some students had wandered in and sat along the heaters along the sides of the room. When Bro. Christianson realized this; he did a quick count and saw 34 students in the room.

He started to worry if Steve would be able to finish the Atonement object lesson.

Bro. Christianson went on to the next person and the next and the next. Near the end of that row, Steve was really having a rough time. He was taking a lot more time to complete each set.

Steve asked Bro. Christianson, “Do I have to make my nose touch on each one?”

A few moments later, Jason came to the room and was about to come in when all the students yelled,

Jason didn’t know what was going on. Steve picked up his head and said, “No, let him come.”

Bro. Christianson said, “You realize that if Jason comes in you will have to do ten pushups for him.”

Bro. Christianson said, “Okay, I’ll let you get Jason’s out of the way right now. Jason, do you want a donut?”

“Steve, will you do ten pushups so that Jason can have a donut?” Steve did ten pushups very slowly and with great effort. Jason, bewildered, was handed a donut and sat down.

Bro. Christianson finished the fourth row, then started on those seated on the heaters. Steve’s arms were now shaking with each pushup in a struggle to lift himself against the force of gravity. Sweat was dropping off of his face and, by this time, there was not a dry eye in the room.

The very last two girls in the room were cheerleaders and very popular. Bro. Christianson went to Linda, the second to last, and asked, “Linda, do you want a doughnut?

Bro. Christianson asked Steve, “Steve, would you do ten pushups so that Linda can have a donut she doesn’t want?”

Grunting from the effort, Steve did ten very slow pushups for Linda. Then Bro. Christianson turned to the last girl, Susan. “Susan, do you want a donut?”

Susan, with tears flowing down her face, asked, “Bro. Christianson, can I help him?”

Bro. Christianson, with tears of his own, said, “No, he has to do it alone, Steve, would you do ten pushups so Susan can have a donut?”

As Steve very slowly finished his last pushup, with the understanding that he had accomplished all that was required of him, having done 350 pushups, his arms buckled beneath him and he fell to the floor.

Brother Christianson turned to the room and said,

“And so it was, that our Savior, Jesus Christ, pleaded to the Father, “Into thy hands I commend my spirit.” With the understanding that He had done everything that was required of Him, he collapsed on the cross and died. And like some of those in this room, many of us leave the gift on the desk, uneaten.”