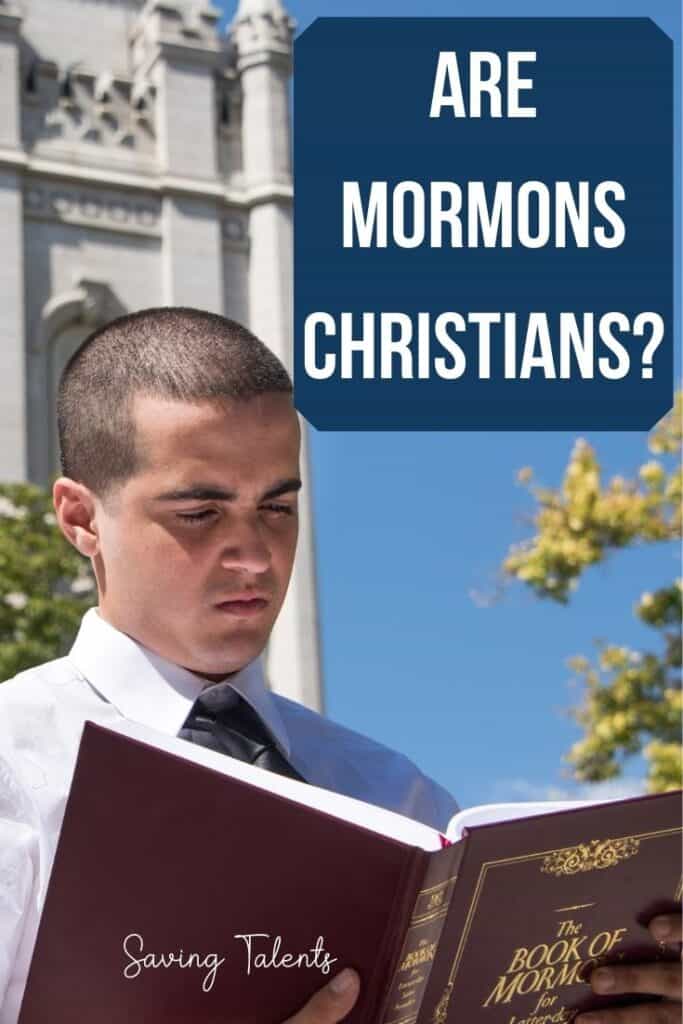 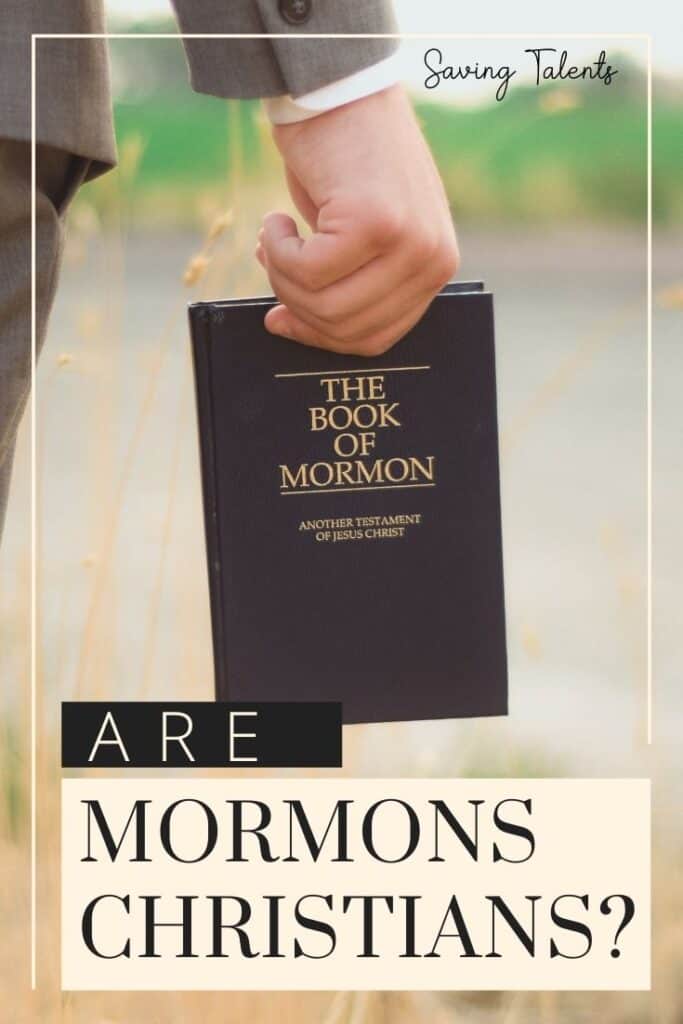 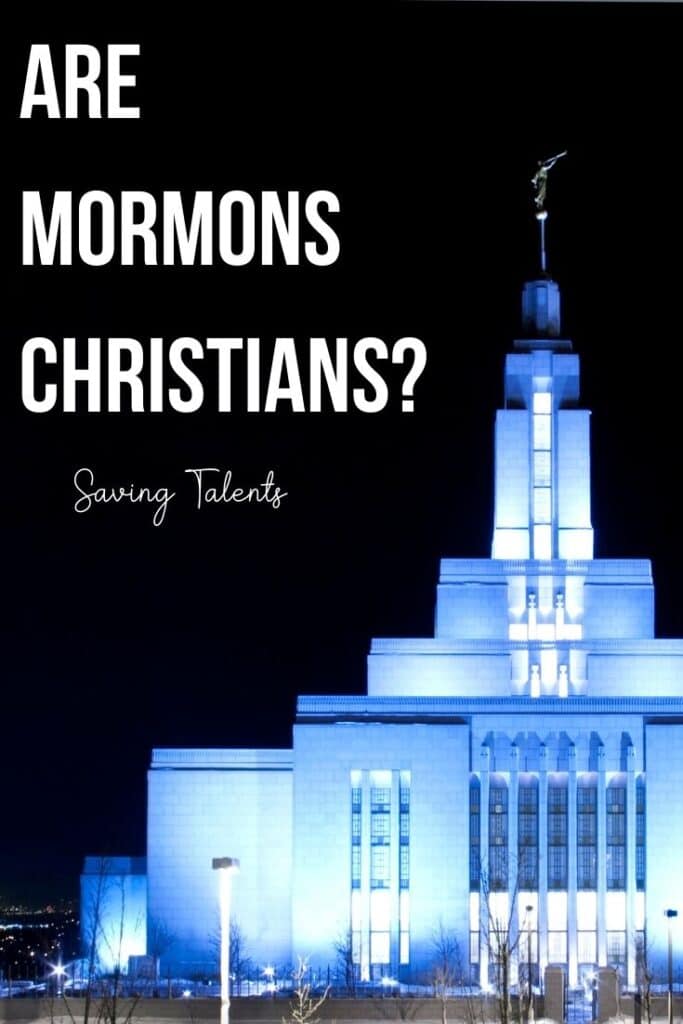 Hey y’all, Tiffany. As a member of the Church of Jesus Christ of Latter-day Saints, people often ask me the question, “Are Mormons Christian?”

The answer is a resounding yes! However, many other Christian faiths claim that “Mormons” are not, in actuality, Christian.

In fact, I’ve actually been removed from some social media groups that are for Christian homeschoolers when they discovered I was a member of the Church of Jesus Christ of Latter-day Saints (aka, Mormon).

I’m writing this post to help address some of those misconceptions and misunderstandings. If you have any questions about it, please don’t hesitate to ask in the comments!

What is a Mormon?

Before we jump into whether or not Mormons are Christians, we need to talk about the meaning of each of those words.

“Mormon” is a nickname some people have given to members of the Church of Jesus Christ of Latter-day Saints. The nickname comes from a book of scripture we use, called the Book of Mormon.

The Book of Mormon contains the writings of prophets in the ancient Americas from 600 BC to 400 AD. Just as God spoke to Moses, Noah, and other prophets of the children of Israel, He also called and spoke to prophets to those who lived on the Western continent.

After Christ’s Ascension after His Resurrection, He came and visited the people in the Americas. These were some of those of whom He said were “other sheep who are not of this fold” who also needed to hear His voice.

Mormon was one of the last of these prophets, and he combined the sacred writings into one book: the Book of Mormon: Another Testament of Jesus Christ. He was one of the few righteous people living around 600 AD. He gave the writings to his son Moroni, who added a few words. Moroni then buried them in the ground to protect them from wicked men searching to destroy them.

The Book of Mormon is not our version of the Bible or a replacement for it.

We love and revere the Bible as the Word of God. It is the dealings of God with His people in Jerusalem and the Eastern world.

In fact, we have several posts about using the BIble here on the blog!

Yes, Mormons are Christians. The subtitle of the Book of Mormon is, “Another Testament of Jesus Christ.”

Where Did the Book of Mormon Come From?

So how did we get the Book of Mormon if the ancient prophet Moroni buried it in the ground?

In 1820, a 14 year old boy named Joseph Smith saw all of the different religions in upstate New York. Hewanted to know which one was the right church to join, since they all had different doctrinal beliefs that they argued about.

He read in the King James Bible in James 1:5 where it says, “If any of you lack wisdom, let him ask of God, that giveth to all men liberally, and upbraideth not; and it shall be given him.”

Joseph went into the woods and prayed to know which church to join. God the Father and His Son, Jesus Christ, appeared to him and told him to join none of the churches. They had all become corrupted and changed in the 1,800 years since Christ had established His church while He was on the earth. They did not have the authority to act in His name.

Shortly after this event, the same Moroni who had buried the records (which had been engraven on golden plates) appeared as an angel to Joseph and told him where to find them. Joseph retrieved them and by the power of God translated them.

Under God’s direction, Joseph established the Church of Jesus Christ of Latter-day Saints. This is the same church that Christ Himself organized when He called the 12 apostles. John the Baptist and Peter, James, and John appeared to Joseph Smith at different times and gave him the Priesthood authority to baptize and lead Christ’s church.

How Do We Know Joseph’s Story is True?

One big reason why the Church of Jesus Christ of Latter-day Saints talks so much about the Book of Mormon is because it is the evidence that Joseph Smith’s story is true.

Every single person can read the Book of Mormon for themselves. At the end, Moroni wrote a promise to anyone who read it and then prayed to ask God if it were true. The promise is that God would bear witness of the truth by the power of the Holy Spirit.

What is a Christian?

So, that’s what a Mormon is – someone who is a member of the Church of Jesus Christ of Latter-day Saints.

Now for the original question – are Mormons Christians?

Well, to answer that, we need to discuss the definition of a Christian.

Interestingly, Jesus never called his followers Christians, nor did the early church call themselves Christians. Instead, people outside the church began using the name “Christian” to describe people who accepted, believed, and followed Jesus.

Acts 11:26 is the first time we read of the word Christian, when the disciples in Antioch were thus named. “Christian” literally means “of the party of Christ” or “follower of Christ.”

Early believers were called Christians because they believed Jesus’ teachings. They accepted Jesus’ death and resurrection as the payment for sin, and they emulated Jesus in the way they lived.

Based on this definition – yes, we Mormons are Christians! In fact, that’s kind of why we don’t like the nickname “Mormon” very much. It hides the fact that our church’s name is the Church of Jesus Christ of Latter-day Saints.

We believe in Jesus Christ as our Savior.

We believe that He was born of the virgin Mary.

He suffered for our sins in the Garden of Gethsemane.

He died on the cross at Calvary.

And He was resurrected on the third day.

We believe He will come again, and the world will recognize that Jesus Christ is the Only Begotten of the Father. He is the Son of God in the flesh and the Redeemer of the world.

We love Him. We worship Him. And we are baptized in His name. We follow His commandments. We set goals to be more like Him.

In my journey with Crohn’s disease, I have called on Him time and again during my darkest hours.

Why Do People Say Mormons Are Not Christians?

Now the big question – why do so many people say that Mormons are not Christians?

Well, there are two reasons for that. The first and most obvious reason is that they simply don’t know much about our beliefs. Since we’re nicknamed “Mormons” and we use the Book of Mormon, they think that we don’t believe in Christ and don’t believe in the Bible. Neither of which is true!

In addition to the Book of Mormon’s subtitle showing our Christianity, it’s also evidenced throughout the book, starting with the first page! The title page of the Book of Mormon, written by those ancient prophets, states that one of the three purposes is

“…to the convincing of the Jew and Gentile that Jesus is the Christ, the Eternal God, manifesting himself unto all nations.”

So, now that you know Mormons are Christians, you can help correct that misconception if you hear it!

The second reason many Christian religions claim that Mormons are not Christians is the belief in the Holy Trinity.

In 325 AD, Christianity had become very widespread. Unfortunately, many different factions argued amongst themselves about the doctrine. The emperor Constantine called a council together, where the different factions came to an agreement over their definitions of Christ and His divinity.

The council determined that God the Father, God the Son, and God the Holy Spirit are three Beings in one and are essentially the same.

Because the Church of Jesus Christ of Latter-day Saints believes that God the Father and God the Son are two different people (with God the Spirit as a third, separate Being), many Christian religions reject our claim to Christianity.

By definition, however, members of the Church of Jesus Christ of Latter-day Saints fall into the category of Nontrinitarians, which are Christians who reject the notion of the Trinity (three-in-one) in favor of the Godhead (three separate Individuals).

As you see, we do not follow man’s debated definition of Christianity formed 300 years after Christ’s death.

However, we do believe in Jesus Christ as the Savior of the world, and we follow the Bible’s definition of a Christian – one who follows Jesus Christ.

So, Are Mormons Christians?

After reading this, I hope you see that yes, we “Mormons” are Christians! We love Him and worship Him. We accept Him as our Savior and Redeemer.

If you have any questions at all or would like to learn more, please don’t hesitate to ask me! You can use the comments section below or you can email me directly at tiffany(at)savingtalents(dot)com.