How to Take a Road Trip With Kids by Yourself 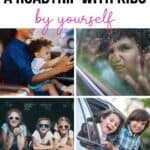 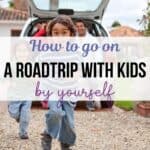 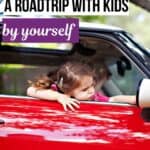 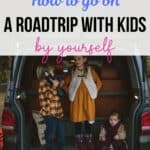 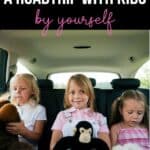 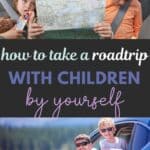 If you are going on a road trip with children, then you will need these tips and tricks to have an easy journey with the kids – especially if you’re going by yourself! These ideas will make for the perfect roadtrip vacation with your family.

I took our almost-5-year-old and our 2-year-old to Utah to visit my parents for about a month.

We drove, which helped us save money and is one of the best frugal travel tips.

And it drove me crazy.

I wanted to share some of the biggest things I learned from this trip about travelling on your own with young kids.  Some of these are things that I did (and they worked!), or they’re things that I wish I had done! 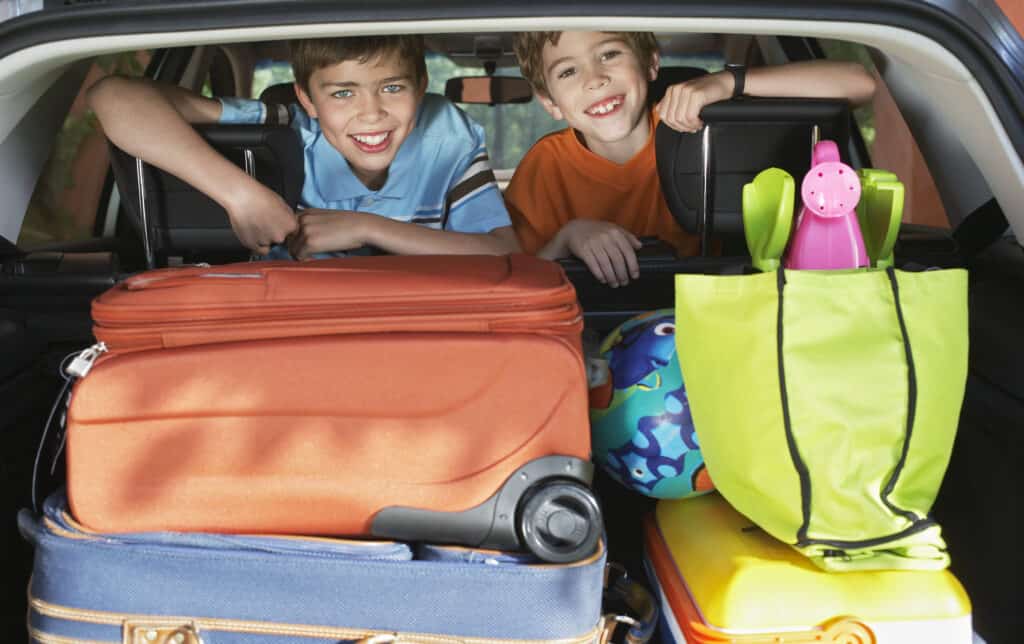 I just can’t say enough about how important it is to keep your car organized when you’re roadtripping with kids by yourself!  Even though a disorganized home can be a compliment, it’s not the same on a roadtrip!  If a kid asks for a snack, there’s no other adult to turn around and get it for them!

I separated all of the kids’ *healthy* snacks into individual sandwich bags (closed tightly) that could easily be grabbed and tossed into the back seat.  They were in a separate shoe box from my own small horde of chocolate and Skittles.  When kids were hungry, I wasn’t trying to portion out snacks or fight over who got more than another.

I also made certain to put the DVDs within arm’s reach, and they were sorted by the order we were going to watch them.  I mean, obviously, you cannot watch Land Before Time X before watching Land Before Time XI.

And yes, there are actually 14 Land Before Time movies.  I’ve seen them all.  Multiple times.  And I may or may not have memorized all of the songs.

One thing that I did not do this trip (that I’ve done before) was wrap little dollar-store gifts for each kid and let them open them at certain points along the way.  The kids get new toys to play with, and it adds a bit of fun and excitement to what we’re doing.

If you need a list of ideas, here are some good ones that we use to fill our non-candy Easter eggs or hand out at Halloween as part of the Teal Pumpkin Project.

Alternating toys with a DVD player is a must.  I don’t know what I would have done without a DVD player, and a tons of DVDs to go along with it.  Our favorites are Land Before Time and the Magic School Bus.  We only watch these movies while we’re travelling.  The kids look forward to it every time. 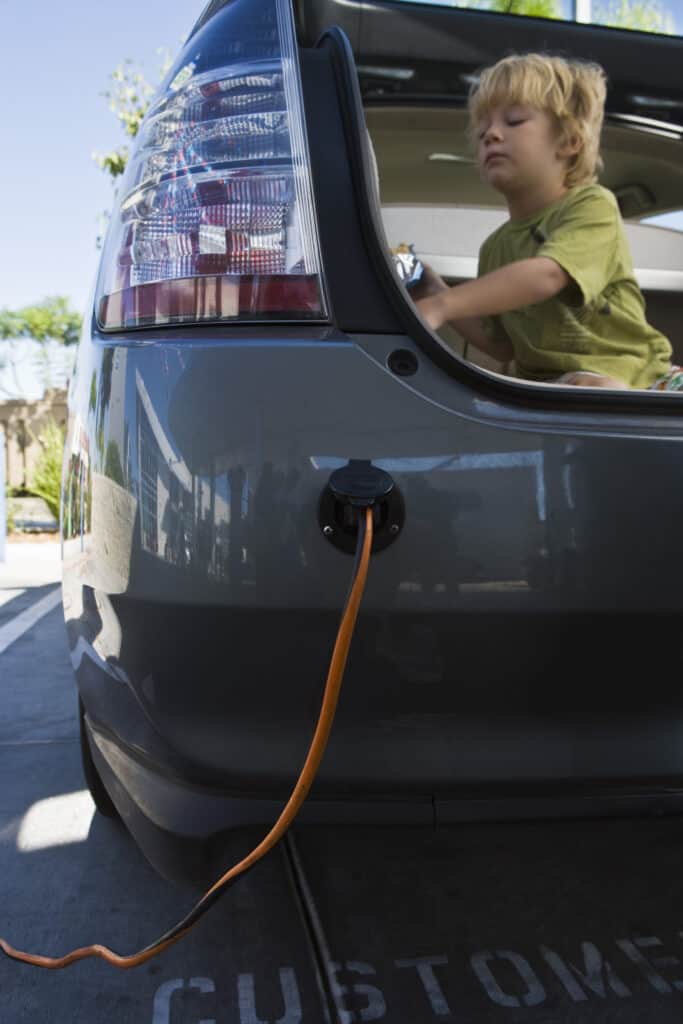 This may seem a bit OCD to some people, but I mapped out our trip. I planned where we would stop to eat, where to stop for gas, and what hotels we were going to stay at.  Having plan helped me not feel stressed.  It also allowed Phillip to have an idea of where we were going to be, as well.

By mapping it out in advance, I could see which McDonald’s did not have a Play Place (yes, I’ve made the mistake before).  I could also choose gas stations that appeared to be in friendlier areas with cleaner bathrooms. 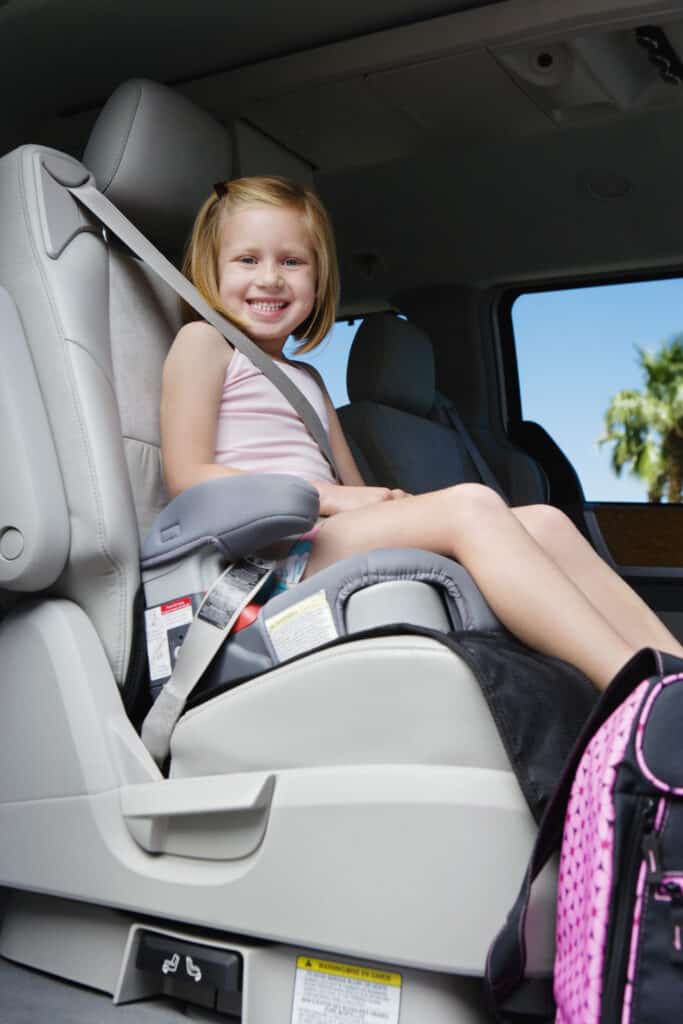 Potty stops are the worst with little kids, especially when you’re travelling by yourself with them.  You can’t leave them in the car with another adult while you quickly run in.  Instead, you’re stuck on the loo, trying to prevent little hands from grabbing the germ-infested garbage cans.

One thing that helped a lot was to put my 4 year old in a Pull-Up.  This way, each time she said she needed to use the restroom, there was no fear of an accident.  I could say, “Honey, our next stop is going to be in 45 minutes.  You can wait until then, or you can use your Pull-up.”

Note: it was HER idea to wear a Pull-up in the first places.  Not mine.  I would never force her into that in a shameful way.  This gave her the confidence that she could hold it, but an accident wouldn’t be the end of the world.  She actually never used the Pull-up once – she was able to hold it for each scheduled stop.

Get a reaching stick

I kid you not, I wish I would have had a reaching stick.  I can’t tell you the number of times I had to pull over along the freeway because my two year old had dropped his blanky or stuffie and it was just out of my grasp (while safely driving).

Short of a reaching stick, try attaching favorite toys to the armrest or carseat with a small bungee cord or similar tie. 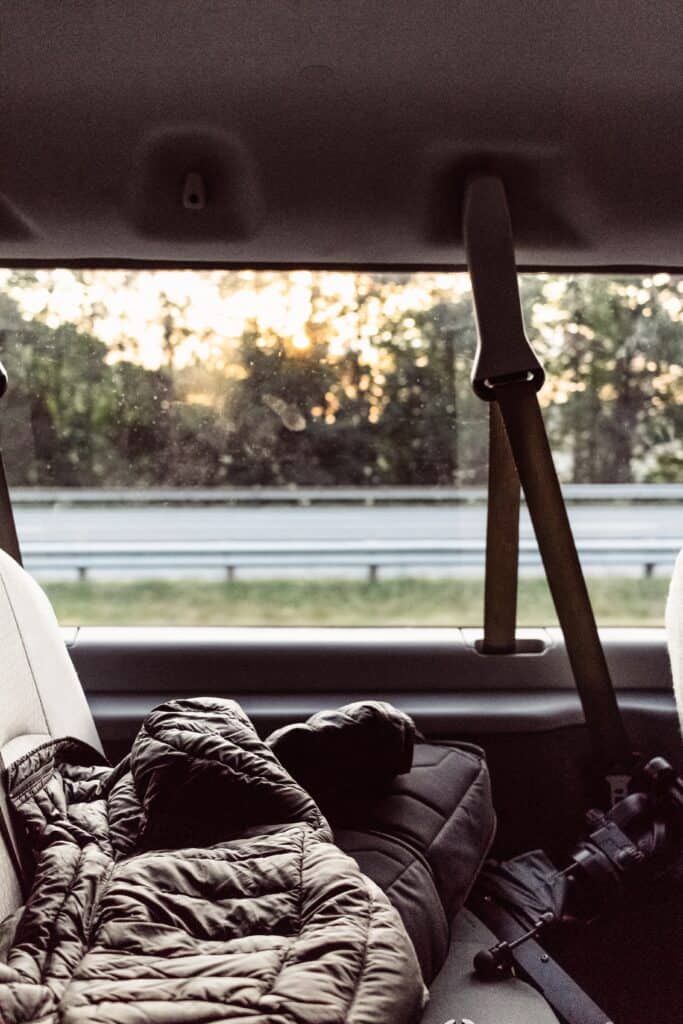 Aside from bathroom stops, one of the most difficult things was checking into hotels.  Usually, one of us stays in the car with sleeping kids while the other one checks into the hotel.  Then one of us takes the kids in while the other unloads what we need.

Since I was doing this solo, I tried to stop driving soon enough that the kids weren’t already sound asleep in their seats.  I also needed to make sure that I got plenty of good sleep, since there was no one to take turns driving with.  (I also brought along an energy drink, just in case.)

The biggest help for checking into hotels was that I packed a small carry-on suitcase with all of our clothes, PJs, toiletries, etc. that we would need for the hotel stays.  We stayed two nights in hotels (driving over a period of three days, since we stopped for some sight-seeing along the way).  Having everything I needed in one small suitcase made getting in and out of hotels go much more smoothly.

(I also had a separate, large suitcase that we used for the three weeks at my parents’ house.)

Since we stayed overnight at hotels early enough before bedtime, I was able to bring food to make some of these hotel microwave meals to help save money on our trip. 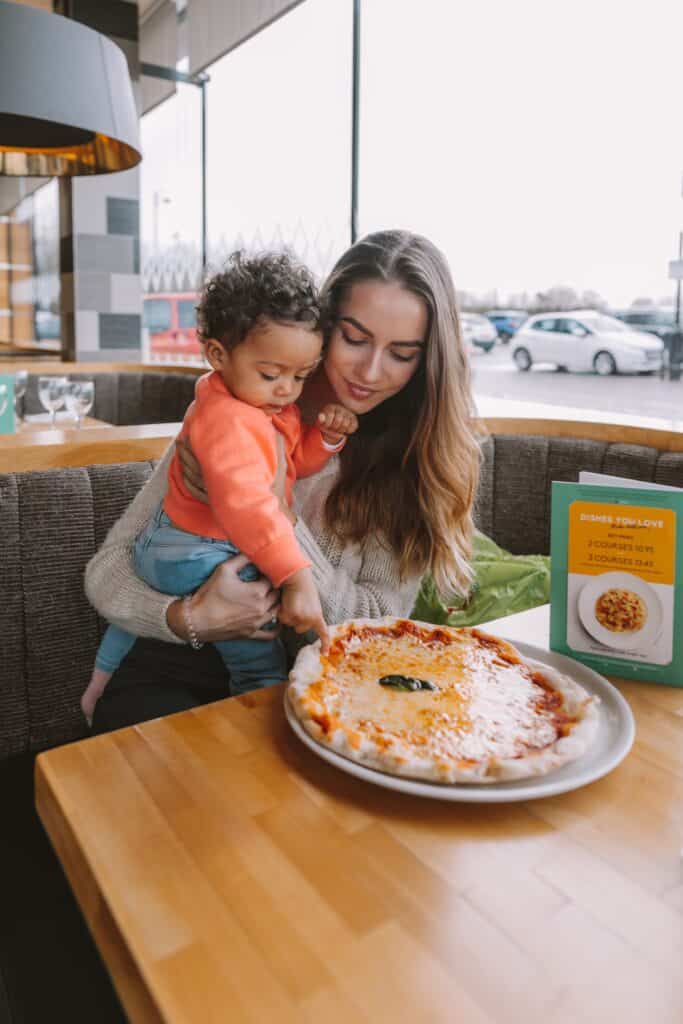 One thing that made this trip a success was finding things to do along the way.

This is part of how mapping out the trip was helpful.  It was little things, like making sure the hotel had a swimming pool so we could swim for 45 minutes before we left.  Or buying a small treat at each gas station that the kids got to pick out for themselves.

The biggest thing was that we made sure we weren’t just driving straight through 24/7.  Even choosing a McDonald’s that had a Play Place (because not all of them do!) as part of our trip was good. 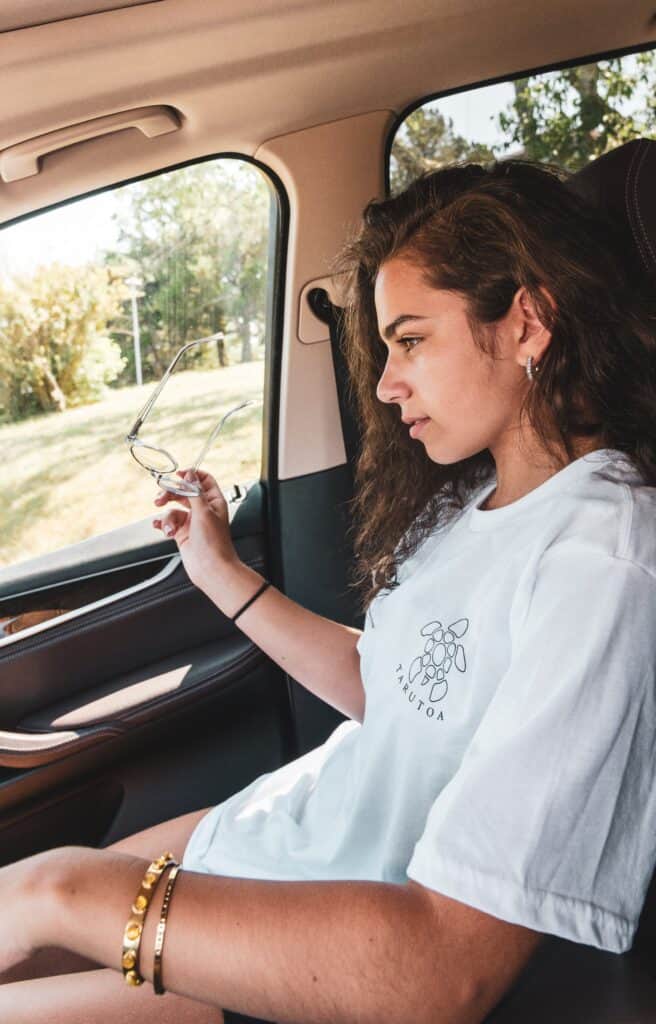 You’re going to be driving in the same position……for a long, long time.  As a result, your body is going to be almost as sore as if you’d run a marathon!  Bring along some ibuprofen, and maybe some extra migraine medicine.

I also brought along an extra back pillow for some support, and it made a huge difference.  You will want to wear loose, comfortable clothing. 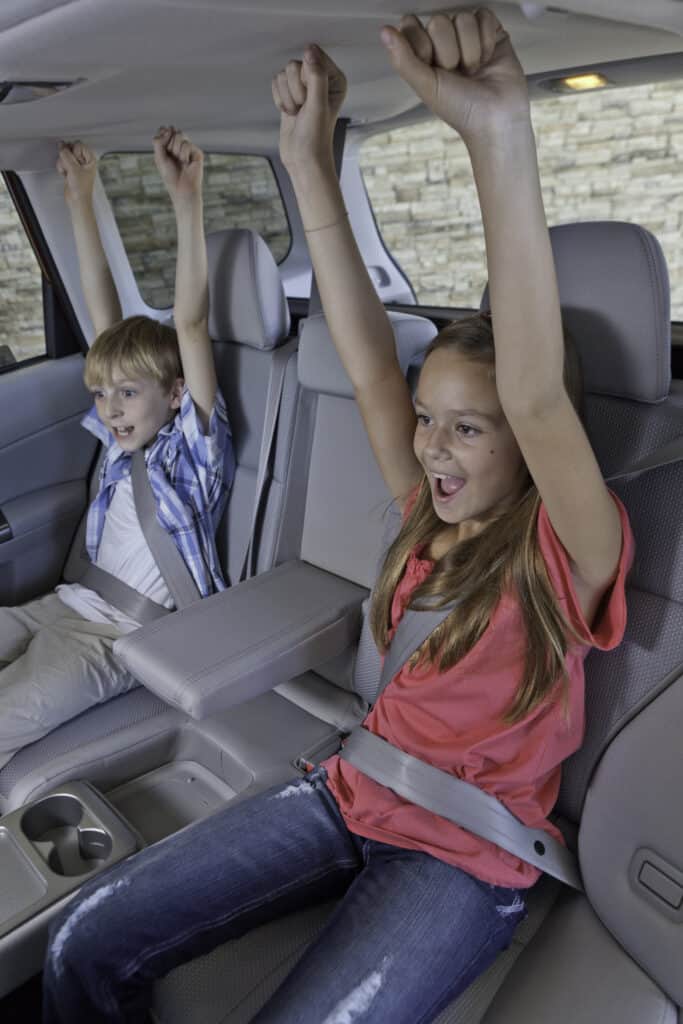 Probably the most important thing you can do to save your sanity is to try to have fun!  If you make this an adventure for the kids, then their attitude will help make the time go more quickly!  Nothing travels more slowly than a car full of crying children.

What ideas do you have to help stay sane on a road trip with young children? 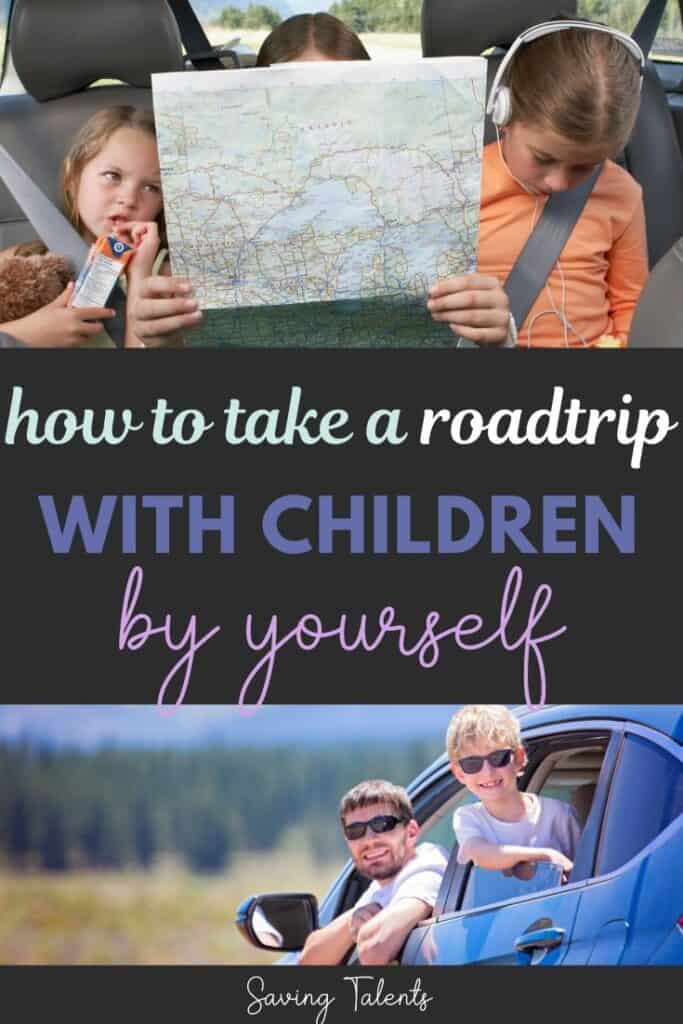 […] reach something your kid dropped on the floor? Me personally, multiple times! And that’s why Saving Talents suggests getting a reaching stick. Plus, you can use it at home for many other […]