Stop Trying to Sprint Through Life – It’s a Marathon 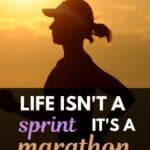 You go each day until you’re burned out.

You’re exhausted, and all you want to do is take a nap.

But each time you sit down to rest, or to go to bed early, or to even enjoy a few minutes of peace, you feel guilty – like you should be doing something, instead of “being lazy.”

In college, I took 17-18 credits each semester, usually while working three separate jobs.

Then shortly after graduation, I was diagnosed with Crohn’s Disease.  All of sudden, my body couldn’t perform at the same level it used to.

So often, I feel guilty when I take a break.  If I am not constantly doing something, like cleaning or cooking or working on this blog, then I feel like I’m a slacker.

And then one day, the principal at the school I was teaching at told me, “Tiffany, life is like a marathon.  It is not a sprint.  You need to pace yourself.”

Shortly after, I discovered the scripture Mosiah 4:27.

‘For it is not requisite that a man should run faster than he has strength. And again, it is expedient that he should be diligent, that thereby he might win the prize; therefore, all things must be done in order.

Life is a Marathon

Think about running a marathon. At the beginning, you have a ton of energy.  But are you supposed to sprint?  No!  You would wear yourself out and be unable to finish the race!  You pace yourself so that you can finish the race at the same pace you started.

You balance speed with endurance.

You go as fast as you can to push yourself but still finish strong.

Similarly, this scripture tells us that we shouldn’t run faster than we have strength because we need to be diligent.

What exactly does it mean to be diligent, in the eyes of God?

When Joseph Smith (first prophet of the Mormon church) was translating the Book of Mormon (companion scripture to the Bible), the Lord told Him,

“Do not run faster or labor more than you have strength and means provided to enable you to translate; but be diligent unto the end.” (D&C 10:4)

Even though it was supremely important, he wasn’t supposed to drop everything and do only that.  It wasn’t sustainable. He still had a family to provide for.

Shortly after Moses led the children of Israel out of Egypt (Exodus 18), people would continuously come to him with questions about God and what they should do to follow Him.  Moses sat in the judgment seat all day, every day.

When his father-in-law arrived, he said,

“The thing that thou doest is not good.  Thou wilt surely wear away, both thou, and this people that is with thee: for this thing is too heavy for thee; thou art not able to perform it thyself alone.”

He then taught Moses about how to delegate responsibilities to others, so that he would “be able to endure.”

What, then, is diligence?

Diligence is being able to go strong until the end.

Diligence is a steady, earnest, and energetic effort.

It is persevering application.

It is constant and persistent effort to accomplish what is undertaken.

How does it apply to me?

One of the biggest things I have learned with Crohn’s disease is that my energy is not unlimited.  I have to recognize when my body is getting worn out.  If I push myself through exhaustion, then I end up being of no use to anyone.

Which is better?  Going strong for one day, then bedridden for a week?  Or going mostly-strong each day for the entire week?

You may not have a chronic illness.  You may just be a regular person.  But do you have other difficulties in life?

Maybe you’re a new mom, up all night with kids.

Maybe you are emotionally drained from difficult circumstances in your life.

Maybe your faith is shaky at the moment.

Maybe you are struggling with depression or anxiety.

Respect them.  Stop burning yourself out to the point of sheer and utter exhaustion – you’re not doing anyone any favors by going so long that you have to just give up.

At this point, you’re probably thinking, “Oh, but my friend has just as many kids as I do, and her house is always spotless, and she always makes dinner every night, and she always has makeup on, and….”

She is probably looking at you and doing the same thing.

When we hear a news story about a person with Downs syndrome making the cheerleading squad, or a paralyzed man going rock climbing, we don’t say, “Psh, there are plenty of people who are cheerleaders and rock climbers.”

Instead, we celebrate their accomplishment because we know how much work for them it must have taken.

Our handicaps in our marathons

Similarly, as you run the marathon of life, you have certain handicaps.

Maybe you are struggling to keep the house clean because postpartum depression makes it difficult to even get out of bed in the morning.

Maybe taking your kids to the park is a huge win because you are physically exhausted from a health issue.

Maybe going to church with messy kids is hard because you don’t feel welcome at church, so the motivation to go is hard.

Stop seeing what you didn’t do, and see what you overcame to get you there.

Stop pushing yourself to the last second of every day because you feel like you “have” to.

Stop burning yourself out to the point that you feel you just can’t do another day.

Your route is so different than my route.  You may have a hill where I have a flat road.  But later, I’ll be swimming across a river as you breeze through a field.

When you hit a hill, stop trying to run up it.  You’re just burning tons energy, and it won’t get you anywhere any faster.

Remember – you need to be diligent.  Push yourself, yes, but not to the point that you can’t take another step.

And if you do that, if you pace yourself based on your own personal marathon’s route, then you’ll be able to make it!  You’ll be able to keep going strong until the end.

And that is what God asks of us.  To pace ourselves so that we can follow Him every day, diligently.

You can do it, even if you’re hobbling along.  And the beautiful part is, not only can you finish and feel the joy of the Father, He will help you along the way.  He has sent His Son to lift your burdens, to even carry you.  And I promise that They will never leave your side.  Not for one single step.

Whenever I start to hang my head in front of failure’s face,

my downward fall is broken by the memory of a race.

excitement sure, but also fear, it wasn’t hard to tell.

They all lined up so full of hope, each thought to win that race

or tie for first, or if not that, at least take second place.

Their parents watched from off the side, each cheering for their son,

and each boy hoped to show his folks that he would be the one.

The whistle blew and off they flew, like chariots of fire,

to win, to be the hero there, was each young boy’s desire.

One boy in particular, whose dad was in the crowd,

was running in the lead and thought “My dad will be so proud.”

But as he speeded down the field and crossed a shallow dip,

the little boy who thought he’d win, lost his step and slipped.

Trying hard to catch himself, his arms flew everyplace,

and midst the laughter of the crowd he fell flat on his face.

As he fell, his hope fell too; he couldn’t win it now.

But as he fell his dad stood up and showed his anxious face,

which to the boy so clearly said, “Get up and win that race!”

He quickly rose, no damage done, behind a bit that’s all,

and ran with all his mind and might to make up for his fall.

So anxious to restore himself, to catch up and to win,

his mind went faster than his legs. He slipped and fell again.

He wished that he had quit before with only one disgrace.

“I’m hopeless as a runner now, I shouldn’t try to race.”

with a steady look that said again, “Get up and win that race!”

So he jumped up to try again, ten yards behind the last.

Exceeding everything he had, he regained eight, then ten…

but trying hard to catch the lead, he slipped and fell again.

Defeat! He lay there silently. A tear dropped from his eye.

But then he thought about his dad, who soon he’d have to face.

for all you have to do to win is rise each time you fall.

Get up!” the echo urged him on, “Get up and take your place!

You were not meant for failure here! Get up and win that race!”

So, up he rose to run once more, refusing to forfeit,

and he resolved that win or lose, at least he wouldn’t quit.

So far behind the others now, the most he’d ever been,

still he gave it all he had and ran like he could win.

Too far behind to hope to win, he still ran to the end.

They cheered another boy who crossed the line and won first place,

head high and proud and happy — no falling, no disgrace.

But, when the fallen youngster crossed the line, in last place,

the crowd gave him a greater cheer for finishing the race.

And even though he came in last with head bowed low, unproud,

you would have thought he’d won the race, to listen to the crowd.

And now when things seem dark and bleak and difficult to face,

the memory of that little boy helps me in my own race.

For all of life is like that race, with ups and downs and all.

And all you have to do to win is rise each time you fall.

And when depression and despair shout loudly in my face,

another voice within me says, “Get up and win that race!” 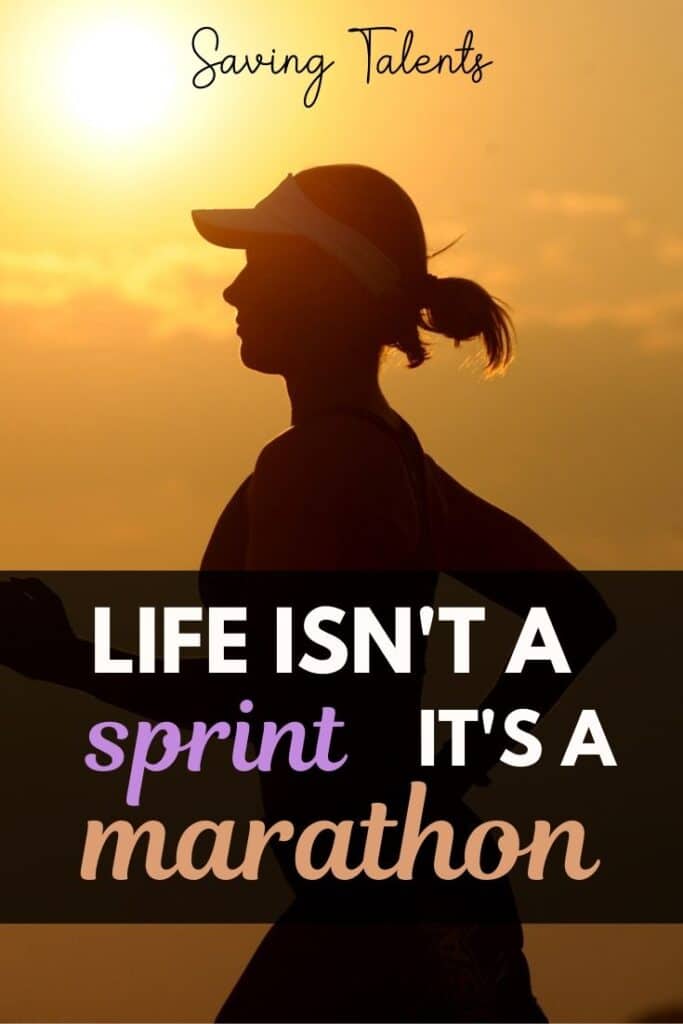 Why Your Messy House is Actually a Compliment

What I Wish I’d Known About Antepartum Depression

Lessons on Frugality from the Mormons

150+ Inspirational Resources to Help When Life Gets... 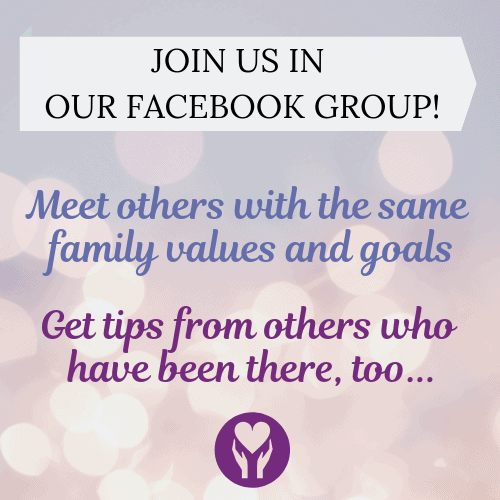