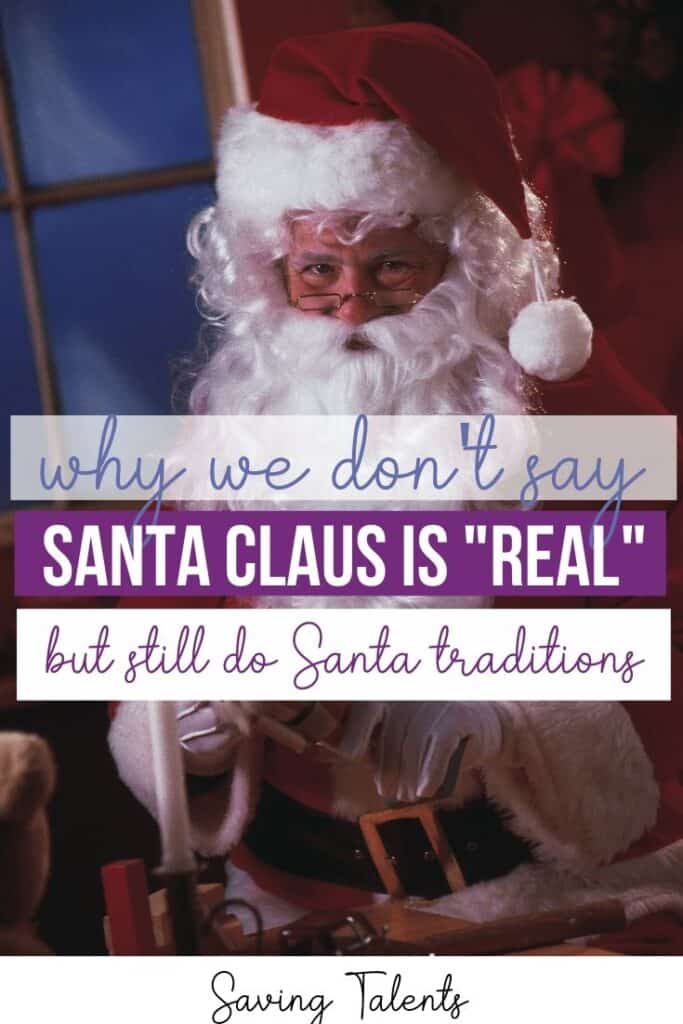 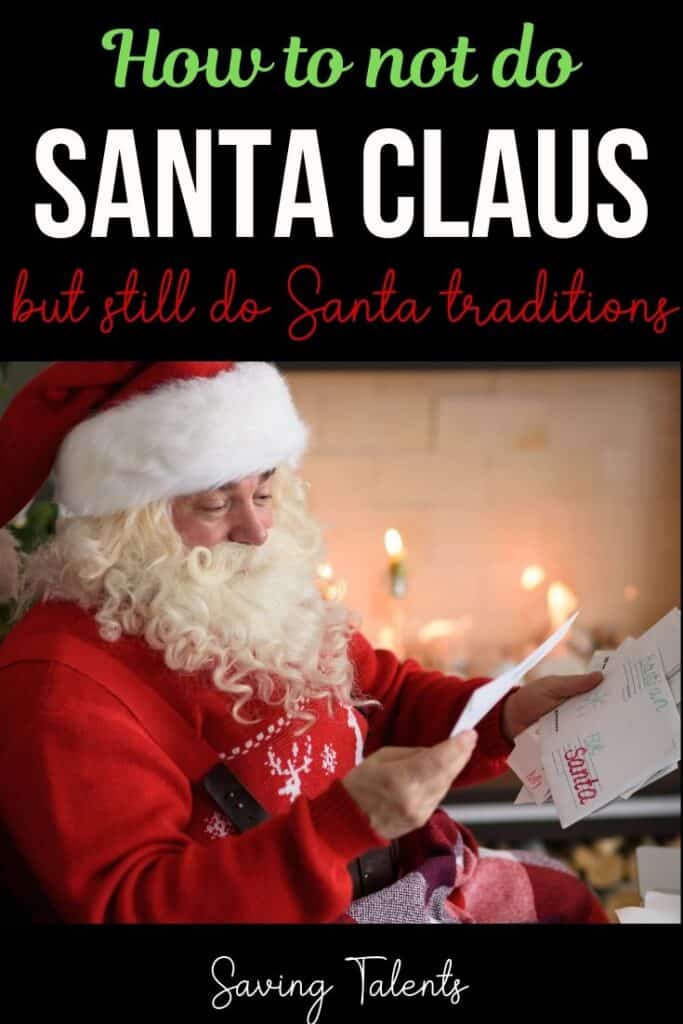 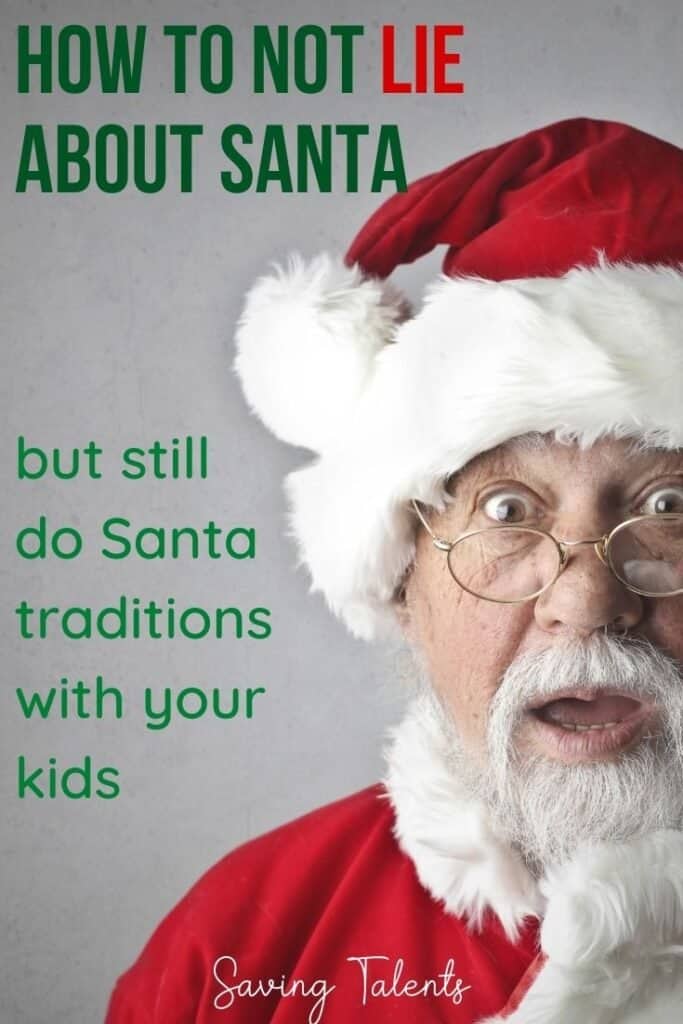 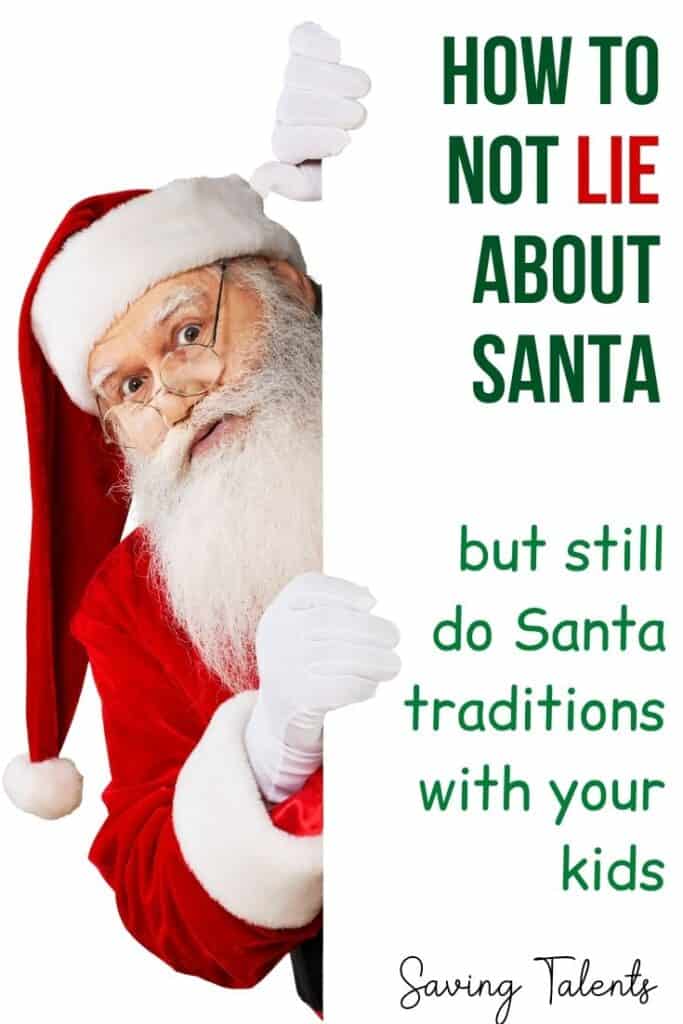 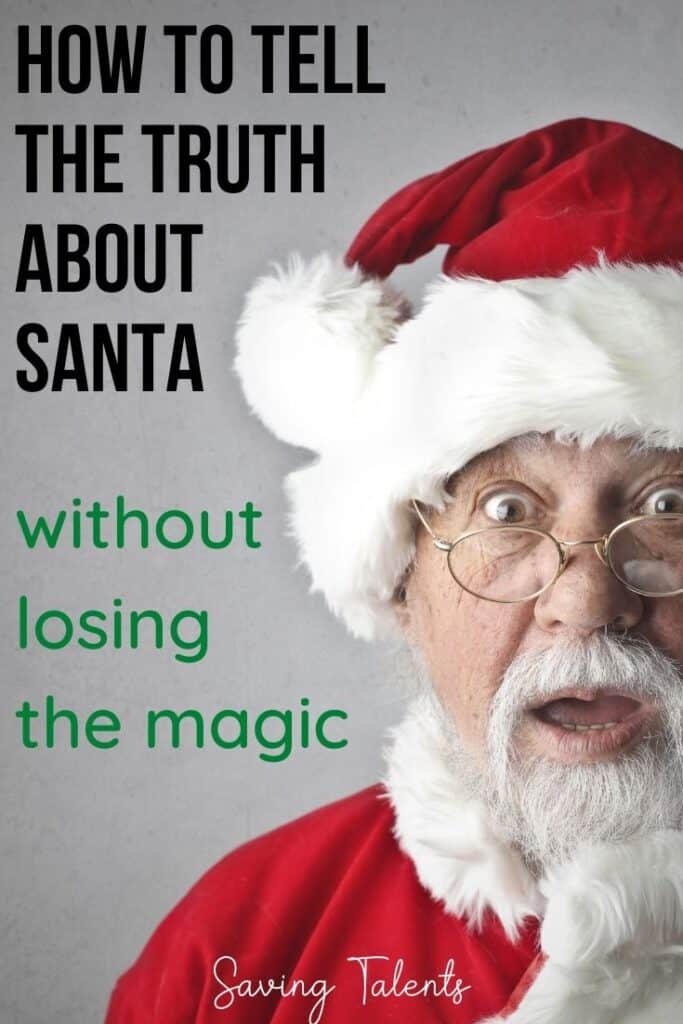 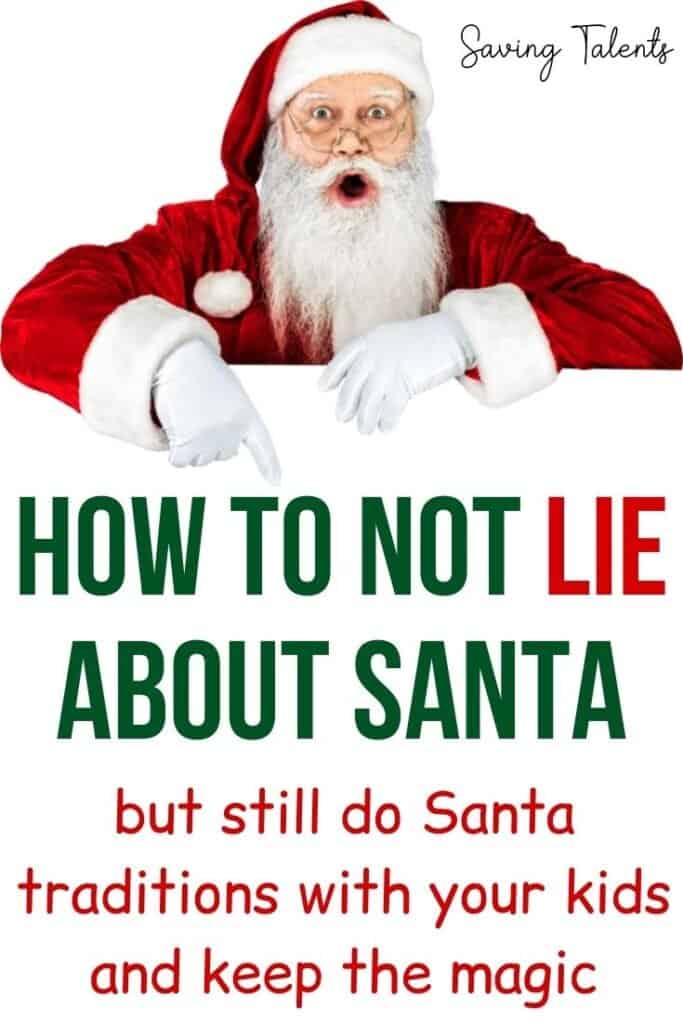 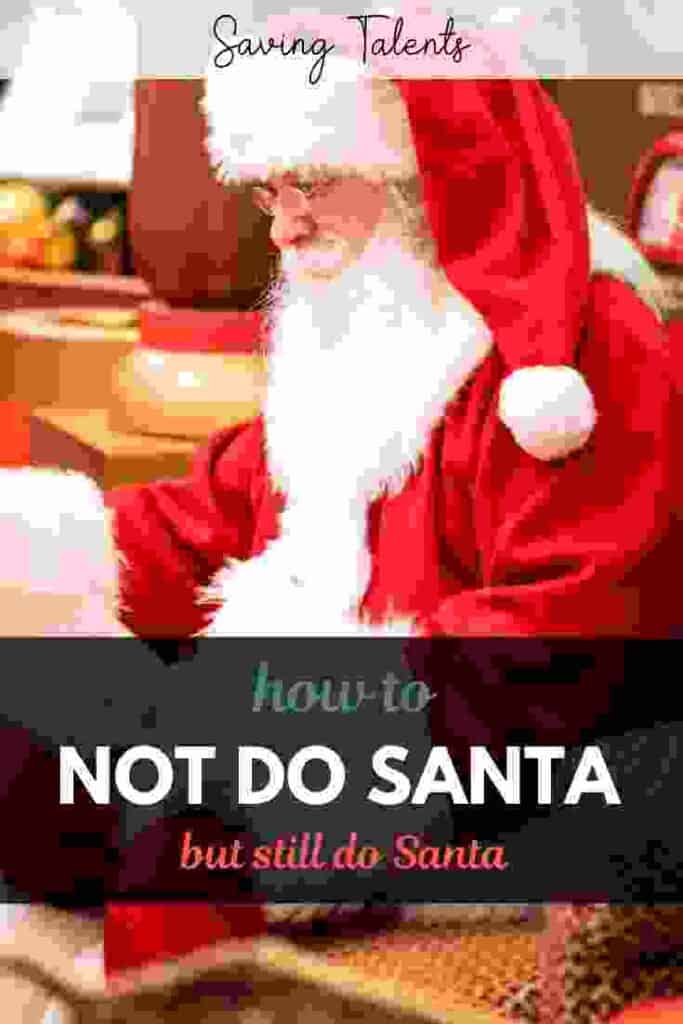 And by that, I mean that while Christmas is still over two months away, Walmart has had its Christmas decor set up already for a few weeks.

You may be already preparing for Christmas.  If you are, make sure you don’t miss out on tons of Christmas ideas we have here on the blog!

One of the biggest thrills about Christmas for most kids is Santa – taking your picture with him, writing him a letter, making cookies for him to leave out with milk, and awakening Christmas morning to the surprise he brings you.

I grew up with most of those traditions; in fact, I believed in Santa until I was about 10.

Our decision to exclude our kids believing in Santa as part of our Christmas holiday comes from two experiences of close friends of mine.  Here are their stories in their own words (names have been changed for privacy):

“Chad’s” Story About Believing in Santa

In my family, Christmas is a big deal.  All of my aunts and uncles live near my grandparents, and each year we gather at their home on Christmas Eve.

After dinner and the Nativity reenactment, all of the grandchildren head upstairs to the attic.  The children are told Santa won’t come until they’re all asleep.  Once they turn 18, they can stay awake to help Santa unload the sleigh.

This was my favorite part of Christmas – envisioning my parents, aunts, uncles, and older cousins helping Santa bring in the gifts.  Each birthday I was one year closer to getting to actually meet Santa!

When I reached middle school, I would still insist that Santa was real.  After all, my family had met him!  I got beat up several times about it, so I eventually learned to keep my mouth closed.  Everyone assumed that I had stopped believing; no one actually sat down to explain it to me.

Finally, the year arrived.  I was 18, and I was going to meet Santa!  After my younger cousins went upstairs, we all sat around telling stories and laughing.

I was on the edge of my seat, listening for sleigh bells.  After a while, I finally asked, “So, when does Santa get here?”

Everyone laughed, thinking I was joking.  In that moment, it all became clear – there was no Santa.  My friends had all been right, and I was wrong.

I weakly joined in the laughter, pretending that I was just kidding around.  Inside, however, my heart was broken.  I cried myself to sleep that night, and Christmas has never been the same since.

When “Chad” first told me this story, he was in tears by the end of it, even though it had happened over 5 years before.  It still was a sensitive subject for him that he hadn’t quite reconciled.

“Jill’s” Story About Believing in Santa

I have several boys and a girl.  My daughter (“Carol”) is much younger than my boys, so she has always been the baby of the family.  We’ve kind of allowed her to be that way, treasuring the magic of everything through her eyes.

One December, when she was about 10 years old, she came to me and said, “Mom, I have a question about Santa.”

With a heavy heart, I began to explain to her the truth about Santa.  Her face fell, and her eyes filled up with tears.

At the end of my explanation she asked, “Mom, Santa’s not real?  You’ve been lying to me?!”

“I thought that’s what you were going to ask me about!”

“No, Mom!  I wanted to ask you where he would live if all the polar ice caps melted!”

She burst into heavy sobs, and ran to her room.  I knocked on her door, and she yelled, “You’re lied to me my whole life!  How can I ever trust you again?!”

She definitely was not emotionally prepared for Santa to not be real.  In jumping the gun, I blindsided her.

While we laugh about it now, I spent several months actively trying to undo the damage and repair her broken faith in me.

After Jill told me what happened, I talked to Carol.  She told me then (and has said a few times since) that she wishes her parents had never pretended about Santa with her.

Why I Don’t Want My Kids to Believe in Santa

After hearing both of these experiences of close friends, I’d been hesitant on how to introduce Santa to my children.  As I looked at my first child during her first Christmas, I tried to envision explaining to her the truth.

After a while, it became clear that Santa just wasn’t something I felt comfortable with.  I realized I just didn’t want my kids to believe in Santa!

Here are a few of the reasons:

What We Do Instead

I want to be clear that the reason why I don’t want my kids to believe in Santa is just my own opinion.  I have zero problems with Santa being taught.  But I just personally didn’t feel comfortable having my kids believe that he is real and a source of presents.

We do, however, still talk about Santa during the holidays!!  Here are some of the things we do.

Tell about the real Saint Nicholas

Santa Claus is based on the story of Nicholas, a rich young man whose parents died at an early age.  He was raised by a bishop, and he gave away his money to buy toys and food for the poor and needy in his town.  And he devoted his life to Christ, and became a bishop himself.

Nicholas even traveled to the Holy Land to see the place where Christ once was.  Along the way, a storm almost sank the boat he was sailing in.  He prayed, and the storm stilled.  The sailors who were present spread the story of what they saw, which is a big part of why Santa Claus is so well-known throughout the word.  We want the focus for Christmas to be on the Savior, not on Santa.

One of our favorite ways to tell our kids about Saint Nicholas is the movie “Nicholas: the Boy Who Became Santa.”  It tells the history of Nicholas.  We then talk about how Santa is a great example of loving others because he loved Jesus.  We love Jesus, too, so we can be Santa to others as well.

We love Christmas traditions, even those that involve Santa.  We still get our pictures with Santa!  In fact, two years ago we stood in line for over an hour at Bass Pro Shop to do it.

What we do, however, is talk about how much fun it is to pretend.  We imagine what it would be like if there really were a man who was going to come down our chimney to eat the sour cream sugar cookies we’re baking and drink our famous crock pot hot chocolate.

Then we write letters to this pretend Santa, telling him what we did to follow Jesus’ example that year.  We tell him what we plan to do to follow Nicholas’s example in helping other children who are less fortunate than us.

And yes, we do also have the kids tell him what their favorite things to receive would be that year.  How else are we supposed to know what to get them?!  🙂

We still pretend that Santa comes down the chimney to fill our stockings! And if you’re looking for ideas on what to put in your stockings, check out this list of 50+ stocking stuffer ideas that aren’t candy.

When we do give presents, we spread them out so that they don’t overwhelm Christmas day.

Even though our kids know that Santa is not real, we tell them that other kids don’t know he’s pretend.  We don’t want to ruin their beliefs in something magical.

Instead, we role-play with our kids about what to do if a friend is talking about Santa.  We usually say something like, “That’s so fun!” or “I’m excited for you!”

We teach our kids to never, ever tell another kid that Santa is just pretend.  That’s their parents’ job, not another kids’ job.

The most wonderful time of the year

Christmas is a magical, wonderful time of the year.  Even though we don’t want our kids to believe in the magic of Santa, we do teach our children to believe in the love of the Savior and His followers, including Saint Nicholas.

By not celebrating Santa as a magical giver of presents, but instead as a devout follower of Christ, we are able to help our children learn to love God even more.

And isn’t that, after all, the entire purpose of Christmas?