Living With a Chronic Illness – How to Stop Comparing Yourself 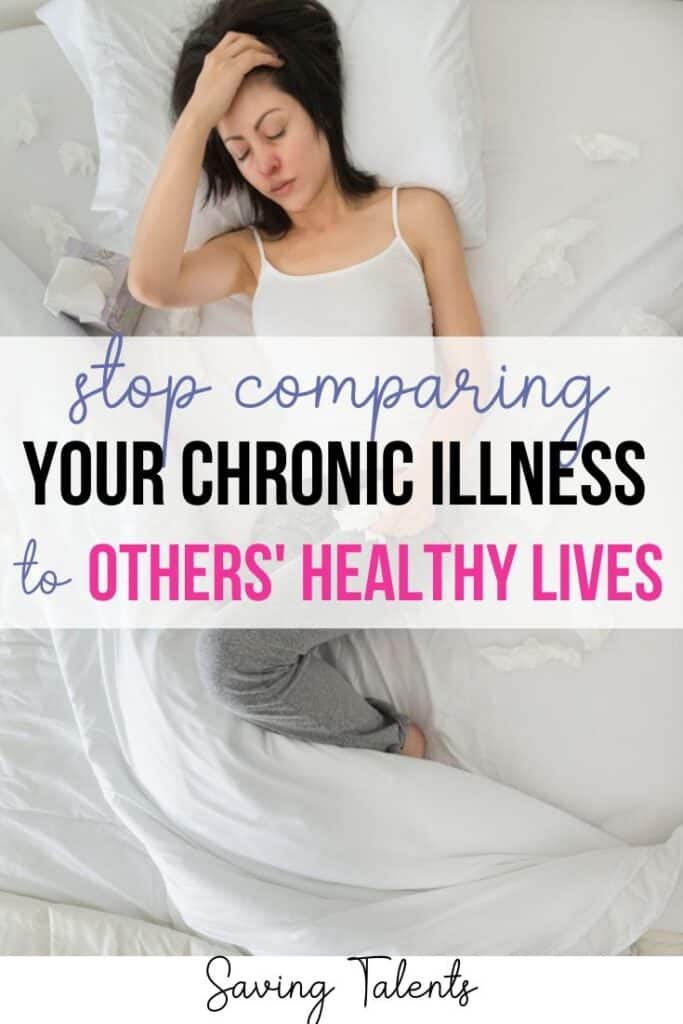 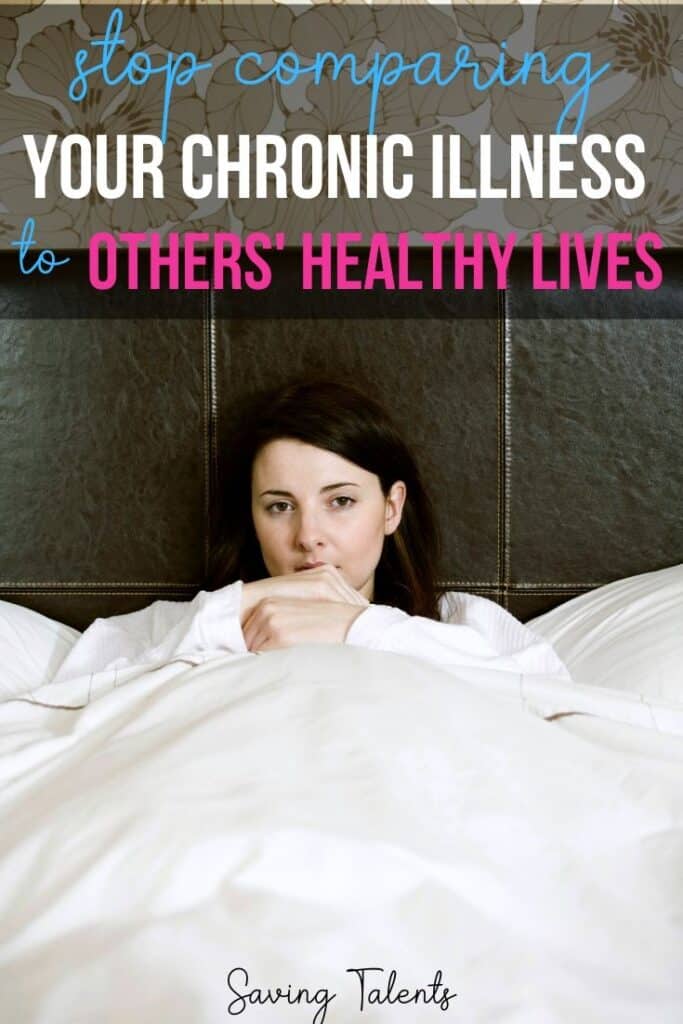 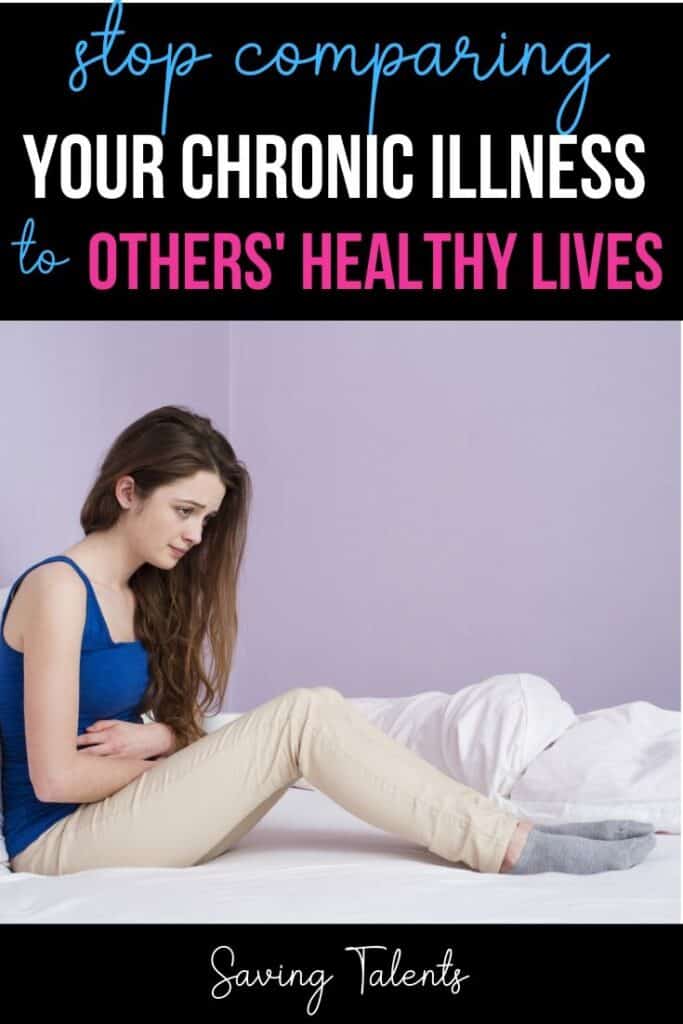 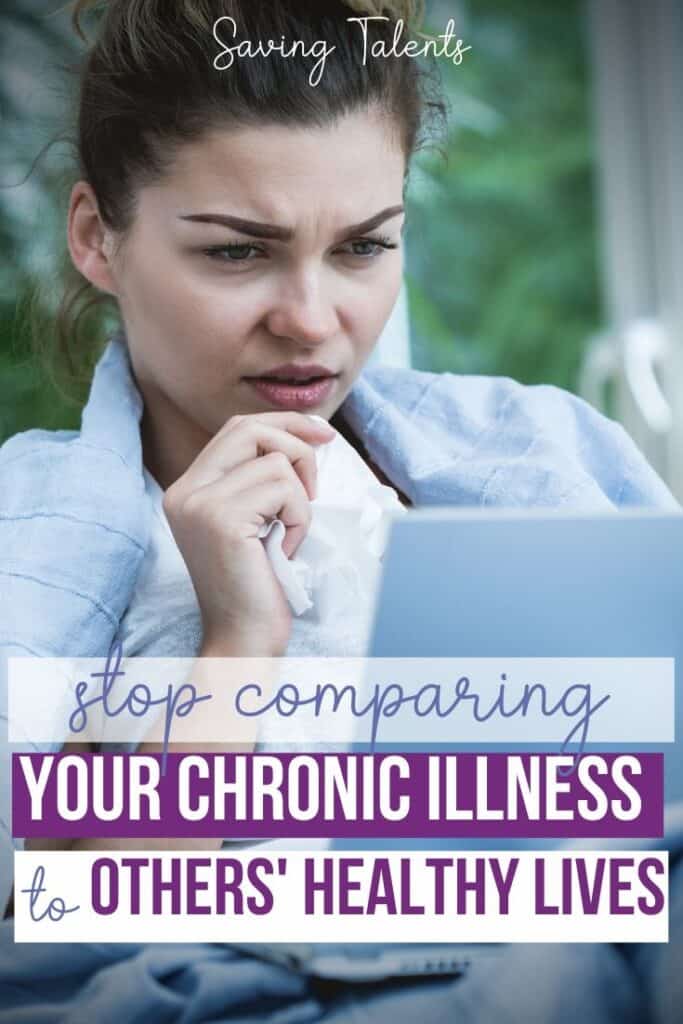 Are you living with a chronic illness? If so, then you need to learn how to stop comparing yourself to others and their healthy abilities.

If you’ve been diagnosed with a chronic illness, it’s easy to compare your life to the lives of your healthy friends.

Living with a disease that doesn’t have a cure can be difficult, especially when social media makes it seem as if everyone else has a perfect life with endless amounts of energy.

Don’t compare your chronic illness to the healthy lives of others.

I just want to share some thoughts with you today, as I sit on the couch, unable to muster the energy to get up and feed my kids lunch because I spent most of the night up sick.

As many of you know, I have severe Crohn’s disease.  Even though I’ve had it for almost a decade now, I still go through the stages of grief on occasion when it gets difficult.

Sometimes it’s so hard to be a chronically ill person.

We wonder why we can’t get better.

We wonder why our families and friends are burdened.

And we worry about the affect it has on our marriage

We wonder why others get healed and we don’t, or they have an easier hit of our same disease.

We wonder why God doesn’t fix it for us when He fixes it for others.

Living With a Chronic Illness

There are two great prophets in the past who struggled with a disability. Both Enoch and Moses overcame them in separate ways.

Enoch Lived With a Chronic Illness

And when Enoch had heard these words, he bowed himself to the earth, before the Lord, and spake before the Lord, saying: Why is it that I have found favor in thy sight, and am but a lad, and all the people hate me; for I am slow of speech; wherefore am I thy servant?

Whether Enoch had a stutter or was merely shy, he had a severe weakness in speaking when compared to others.  When he expresses his concerns to the Lord, what does the Lord promise?

And the Lord said unto Enoch: Go forth and do as I have commanded thee, and no man shall pierce thee. Open thy mouth, and it shall be filled, and I will give thee utterance, for all flesh is in my hands, and I will do as seemeth me good.

Enoch’s mouth was filled, and he was able to teach the people with his own voice.

Moses Lived With a Chronic Illness, too

Then there’s Moses who is called as a prophet in Exodus 4:10:

And Moses said unto the Lord, O my Lord, I am not eloquent, neither heretofore, nor since thou hast spoken unto thy servant: but I am slow of speech, and of a slow tongue.

Moses also says that he was “slow of speech.”  But the Lord doesn’t fill his mouth. Instead, he tells him that his brother Aaron is a good speaker. Moses will tell Aaron what to say, and Aaron will say it for him.

How to Stop Comparing Yourself

Do we recognize Enoch as any greater of a prophet than Moses?

Does Moses’ inability to speak himself make him any less worthy?

No, of course not.

Now replace this with yourself as a family member, a church member with an assignment, a parent….whatever your roll is.

Are there times that you can’t actually DO what needs to be done? But the Lord sends you people who can help do what you tell them to do?

We all have a mission in this life. Moses did. And the Lord sent him someone to help with it. When Moses tried to tell the Lord of his shortcomings, the Lord said, “and the Lord said unto him, Who hath made man’s mouth? or who maketh the dumb, or deaf, or the seeing, or the blind? have not I the Lord?”

The Lord MADE our bodies the exact way that they are. Period.

So when they fail, WE do not fail!

The Lord wouldn’t make it impossible for us to complete our missions for Him by giving us a faulty body. That would be like expecting my 2 year old to go over and make his own sandwich for lunch.

Another similarity like this is Lehi and Jeremiah. We don’t often think of them together, since one is Book of Mormon and the other is the Old Testament. But they were both prophets in Jerusalem at the exact same time.

Lehi was told by the Lord to flee from the destruction. Jeremiah was told to stay, and he ended up witnessing the entire destruction of his city and was carried into captivity.

On the surface, it looks the same: two prophets told to the preach the word to the same city at the same time. Yet the results were radically different for the two

Did the Lord love Jeremiah any less, and that’s why he was left to be taken to captivity? Of course not. They each had vital roles to play to different segments of the city.

Similarly, we can compare ourselves to others: on the surface, we’re just people trying to live the way Jesus Christ taught.

He has a plan. And He is in charge. And we are needed exactly where we are, with our exact bodies that He created.

Was this post on living with a chronic illness helpful for you?  Do you know someone it could benefit from what you’ve learned about not comparing yourself?  Share it on Pinterest!

Why Your Messy House is Actually a Compliment

13 Microwave Meals to Make in a Hotel Room

What I Wish I’d Known About Antepartum Depression

Why I Don’t Want My Kids to Believe...

7 Lessons on Frugality from the Mormons

150+ Inspirational Resources to Help When Life Gets...

[…] Don’t be so hard on yourself if you can’t do all of the “mom” things that you see other moms doing. The most important thing is that your children know they are loved. […]