Honoring Fathers the Way We Do Mothers 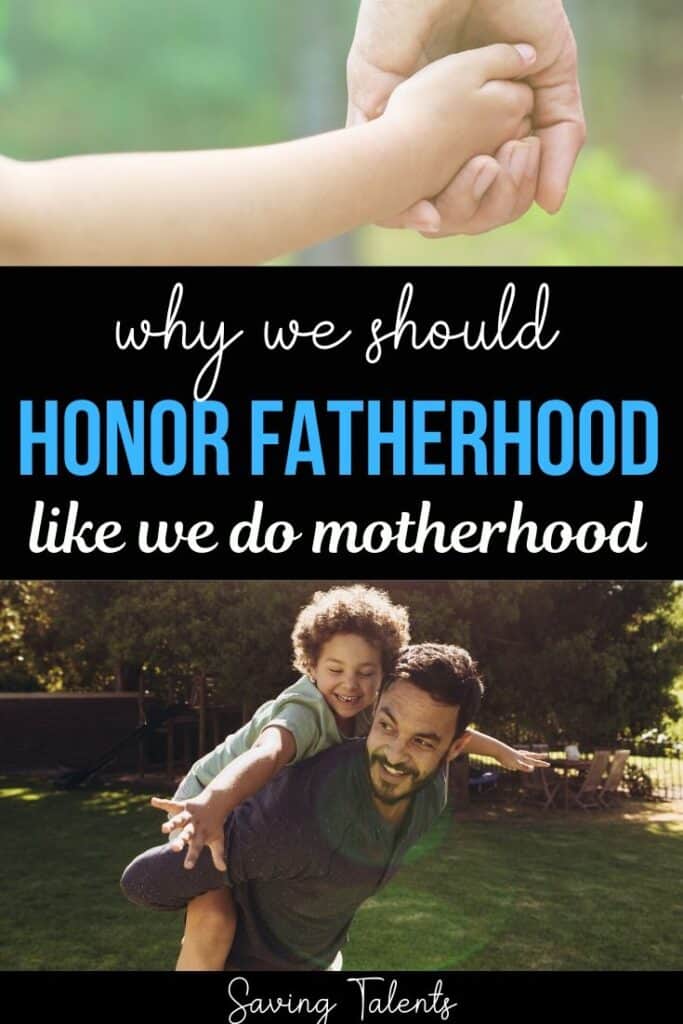 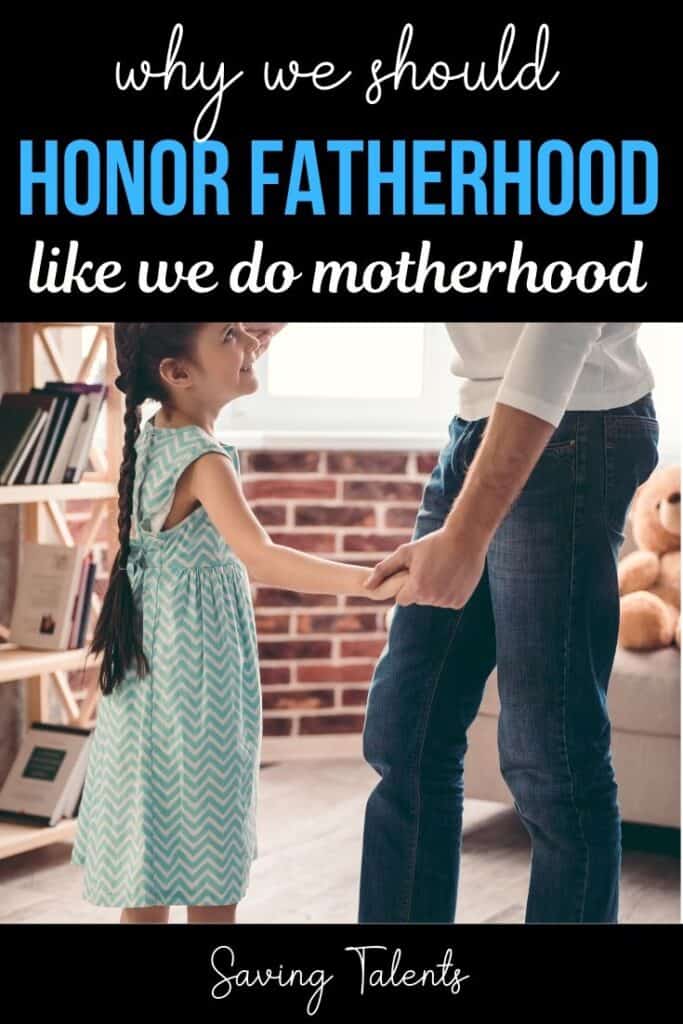 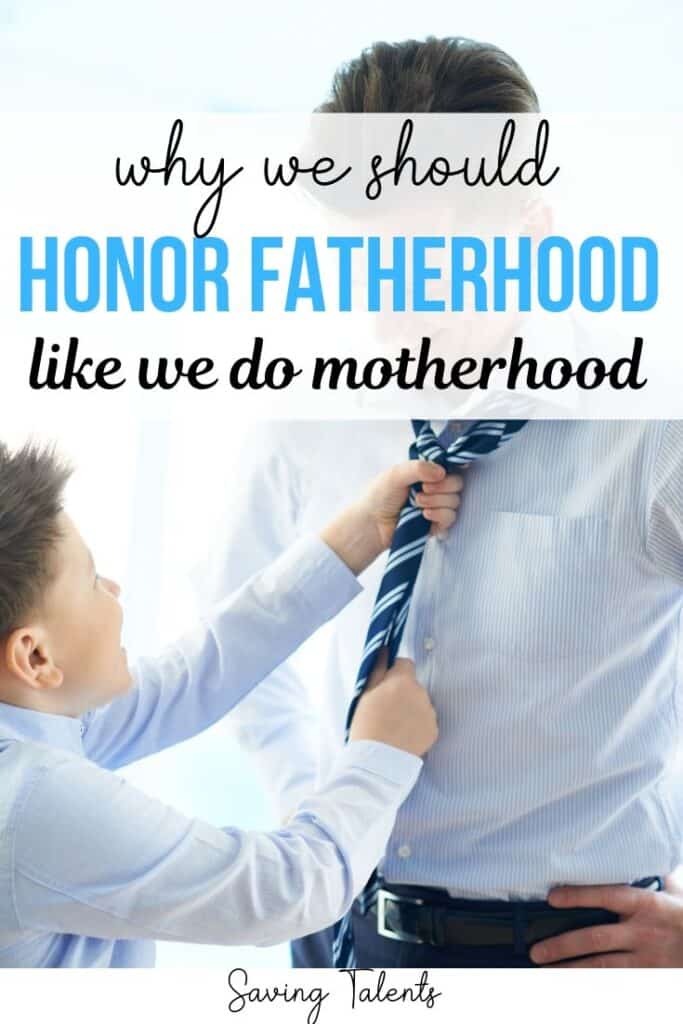 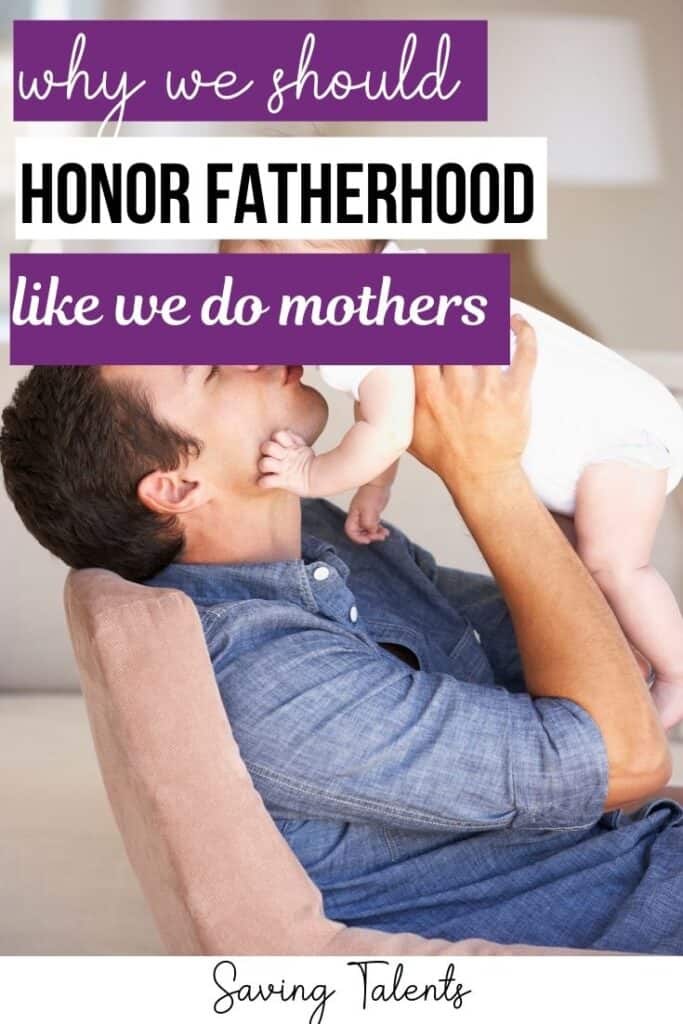 With the rise of feminism and the MeToo movement, mothers are getting more recognition for all of their hard work.  This post walks through how to make sure that honoring women and their capabilities doesn’t come by demeaning men and fathers.  Whether it’s Father’s Day, or just any day, use these quotes, tips, and ideas to honor fathers and their role in the family.

I want you to take a minute to watch this commercial:

Now, I want you to take a minute to watch this commercial where it’s honoring fathers:

How does each commercial make you feel?

Now, I want you to think of each commercial, but imagine that instead of the father being portrayed, it’s the mother.

Now how does each commercial make you feel?

I’m willing to bet that you laughed at the wrap commercial when it was about the father; but if it were portraying the mother, it would anger you.

But the second commercial, I bet, prompted feelings of tenderness and warmth, no matter which gender it was portraying.

In fact, there’s already been a similar video about mothers:

I want to ask you a question, and I want you to consider it carefully:

I’ve been noticing a trend over the years.  As women become more confident and more sure of themselves, it also seems to come at the expense of the value of men and fatherhood.

Why?  And what damage can this cause?

I want to share some experiences with you about this. And I want you to think about yourself in both positions: in the wife’s place and in the hussbamd’s place.

Teaching Him a Lesson

When we were first married, my husband inadvertently said something that hurt my feelings on our way to my parents’ house for dinner.  When I showed up with red eyes, my father asked me if I was okay.

Before I continue this story, I should mention that my parents probably like my husband even more than they like me!

I tried to brush it off by saying something flippant, “Oh, I just haven’t trained Phillip how to talk to his wife the right way yet.”

Note: I almost never say things like this.  I strongly feel that it is extremely disrespectful to joke about how men aren’t great at “watching kids” or cleaning up laundry, even if it is “just a joke.”  But that’s for another day!

My father didn’t laugh; instead he stopped me, looked me straight in the eye, and proceeded to explain a concept and perspective about marriage that I had never considered before.  It’s become the most important piece of marriage advice I’d ever heard.

You see, it’s not my place to “train” my husband about anything.

That’s something the world is going to do.  At this time, my husband was just finishing his undergrad and was entering the “adult” world of full-time employment and taking care of a family.  He was going to be going out into new situations, and the world was going to teach him some very hard, difficult lessons.

The world, you see, is not very forgiving of imperfections and weaknesses.  My husband was going to be surrounded every day with people watching what he did, measuring how he performed.  And the world was going to force my husband to face up to the areas where he “wasn’t enough.”

Instead, my job is to make our home a haven, a refuge.  My husband and our future children would be going out into the world and would be slapped in the face at times with their inadequacies.  Our home needed to be a safe place for him to return and work out those lessons.

How would you feel to hear your partner tell others he hadn’t “trained his wife yet” on how to be a good housewife?

Several years ago, a group of women from church decided to have a retreat for the weekend.  They left their children with the fathers, and they went up into a cabin in the woods to have a much-needed break.

While there, they began joking about the state their homes were going to be in when they returned.  They laughed as they imagined the disaster in the kitchen, the mismatched clothing on the children, and the general chaos.

After several minutes of this, one woman said, “I would gladly take all the mess in the world if it meant my children could spend this time with their father.”

Her husband had recently passed away from cancer, leaving her alone with three young children.  Her words were sobering and profound.  Keeping an eternal perspective is one of  four important lessons Phillip and I have learned by dealing with my Crohn’s.

Always speaking kindly about your spouse is one of 10 vital tips I share with newlyweds.

How would you want your partner to speak about you when out with the guys?

Get closer to your spouse with these 100 frugal date ideas.

We often hear that God is the third partner in our marriage, but most of us leave that as saying prayers as a couple, scripture study, and more.  However, we tend to stop there.  We don’t truly involve Him as a third partner, which is what we should do when our spouse hurts our feelings.

Let me give an example of what this could look like.  Let’s say you decide to surprise your husband with his favorite dinner, which usually takes a lot of work to make.  He comes home late without telling you and in a bad mood. Dinner is already cold; he eats it without a thank you, then heads off to the living room and watches TV.

Now at this point your feelings are hurt.  In your mind, you have two choices.  You try to take the “higher road” and not mention it, in an attempt to be understanding.  Or you could go talk to him about it, but that might lead to a fight, or might just make him feel guilty.

Note: we are approaching this as if you are in a healthy, functional relationship; not an abusive or one-sided marriage.

Either of your options leaves one of you with hurt feelings.  However, there is another option: talk to the third partner in your marriage.  Go to God in prayer and say,

If you are struggling in your faith, then is there someone that you both trust who could be your sounding board when you are in a similar situation?  The point is that you don’t alleviate your own hurt at the expense of the other’s feelings.

Would you want your spouse to hurt your feelings so that he wouldn’t have to feel bad about something?

Imagine he were your son

Shortly after I was married, my Crohn’s disease got out of control.  I was admitted to the hospital 13 times in our first nine months of marriage, and 35+ times in our current 6 ½ years of marriage.

Most of that time, we lived far away from family.

I know that during that time, my mother prayed that my husband was taking care of me, since she often wasn’t there to do it.

I want you to take a minute and imagine your son, all grown up.

He has a job, and he is starting his family.  He isn’t perfect, and sometimes he messes up.

How do you want his wife to treat him?  Do you want her frustrated that he can’t remember to take out the garbage or put his socks away?

Think of the last words you said to your husband in frustration or anger.  Now put those word’s into your son’s wife’s mouth, directed at the man you gave birth to.

Your home, your relationship, should be a safe haven for your spouse.  It’s one of five keys to living happily ever after together.

How does it make you feel, imagining your son’s wife speaking to him the way you speak to your husband?

At the beginning, I asked you to think about how you would feel if those commercials were about mothers instead of fathers.

They’re funny until we switch genders, and then they’re pretty offensive.

They’re funny until we imagine them directed at our sons, whom we love and we know are trying to be good husbands and fathers.  They are doing their best.

Fatherhood is a noble responsibiity, as evidenced by these quotes and videos.

Now, I’d like to ask you to give you a challenge.

The next time you talk to or about your partner, ask yourself, “Would I want my partner saying this to/about me?”

If you’re frustrated that he comes home from work and “messes everything up,” consider how you would want him to treat you if you had to take over his job for a day so he could have a day off.

Would he have to explain things more than one time?

Be the kind of wife you would want your son to have.

Be the kind of wife a husband feels safe around.

And be the kind of wife a husband can trust with his heart and his insecurities.

Other Ideas for Honoring Fathers

If you are going to be honoring a father this Father’s Day, here are some ideas:

Crafts and Printables for Back to School

Why I Don’t Want My Kids to Believe...

45 Free Ideas To Entertain Your Kids